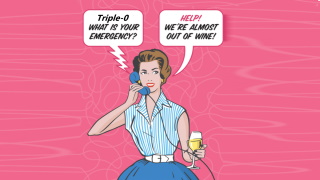 I don’t know about you, but I like to remember life in the fifties sometimes, a time when everything moved at a slower pace and we didn’t rush around eating fast food all the time, as so many of us appear to do now, in fact true ‘fast food’ hadn’t been invented yet, apart from a couple of exceptions as you’ll see below!

When I was in my late teens I remember that olive oil was something kept in the medicine cabinet for the relief of blocked ear canals. My mother considered it ‘much too oily’ to use in cooking – she did all her’s with home-made beef dripping or lard. And she wouldn’t have dreamt of adding spices to a meal either, they were something slightly weird they used in the middle east to embalm dead bodies, not to eat!

Bananas and oranges were fruit that was bought, at considerable expense, for consumption at Christmas time, as was chicken. And turkey wasn’t seen in our household at all, even during the festive season, only rich people, most of them in America, ate turkey.

Sunday roast during the rest of the year, (there was always a roast on Sundays), usually contained either beef, lamb or occasionally pork and included any three combinations of  potatoes, peas, carrots and cabbage – Mum wouldn’t dream of serving up a meal with four vegetables in it, it was always meat and three veg.

The only crisps available in those days, (sometimes known as ‘chips’ here in Australia), were made by Smith’s and they came in only one flavour, what we would now know as ‘plain’. They also contained, inside the pack, a little sachet of salt so that you could add your own, to taste, or leave it out altogether.

Crisps were about the only ‘fast food’ available in the fifties, apart from the ubiquitous fish and chips, which had to be wrapped in old newspaper or else it wouldn’t taste right.

As for having a savoury meal served with rice! Well, whoever heard of such a silly thing; rice was something you cooked with milk and sugar to serve as pudding after the meal. By the way, you’ll notice the final dish was called ‘pudding’, nobody had thought of the word ‘dessert’ in those days.

Microwaves, mini ovens, toasters, liquidizers and food processors had either not been invented yet, except in science fiction, or were much too expensive for the ordinary household, as were electric irons, electric kettles and dish-washing machines.

Even a refrigerator was something not found in many homes. I remember my mother kept food fresh by storing it in a small wooden cabinet with wire mesh on all four sides, over which she draped a damp towel so that it cooled the air inside by the simple use of evaporation.

Milk was purchased from the dairy just up the road, and delivered to our front door every morning. The milkman, who also owned the business, had the milk delivered to him in large milk-churns and he then ladled it, by hand, into bottles which he capped with special cardboard discs.

If Mum ever ran out of milk, she could send me up to his place with sixpence in my hand, and he would fill a bottle for me, on the spot! Leaving the bottle to stand for a while resulted in the top third turning to glorious cream that my mother could skim off for separate use, if she wished.

No one would have recognised seaweed as a food, nor would they know what you meant if you mentioned ‘kebab’, ‘chicken korma’, ‘egg foo yung’, ‘sushi’ or ‘barbecue’. Add to these, such concepts as ‘boil-in-the-bag’ or ‘oven chips’ or ‘croissants’, and you have some idea of the simple lives we used to live in the fifties.

We used to go to the ‘pictures’ on a Saturday evening, paying 1/6, (one shilling and six pence, or about fifteen cents in today’s money), where we queued to get in and there was no seat reservation, so you went in when a seat was available, often seeing the second half of the main feature, then the news and the second feature, before you saw the first half of the main feature – imagine a cinema trying to get away with that today. The films always seemed very good though, as much as anything because TV hadn’t arrived yet, to show us all a new world of entertainment!

I wonder sometimes, if we are any better off today, with all the technology, things pre-prepared and even    pre-cooked for us, but with little or no knowledge of the basics of living which stood us in good stead just after the war?