Giving Up The Weed! – Brian Lee 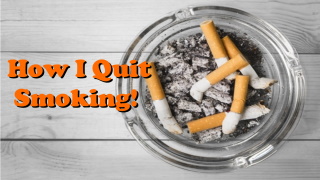 The first time I gave up smoking, it lasted for about half an hour. I was sitting in a pub with a few mates and in a moment of bravado I said I thought it would be easy to give up.

All that was needed was will power.

Mine lasted the half hour mentioned above, and it also cost me a pint all round, so I decided then that if I ever did try it again, I would be more circumspect, and keep the idea to myself.

The second time I packed it in must have been about two years later, when I was twenty. This time I was sitting alone on the upper deck of a bus, late on a Saturday night, on my way home from an evening in the pub with the same mates I had been with, the last time I tried.

You will note here that having learnt my lesson before, there was no display of bravado in front of them. I doubt that I would even have given it up that night, if there had been anyone else on the bus.

As it was, I was able to take out the packet, check that there were five cigarettes still in there, (I very nearly weakened at that moment!), then I screwed up the lot, packet, fags and all and threw them under the seat in front of mine.

This action caused me some distress because it was then that I realised I was nearing my stop, and I usually had one on the way home, about ten minutes walk away, the perfect smoking distance!

But it was too late, I could see the tattered remains of my ciggies, appearing to grin at me from their resting place on the floor.

So I did the only thing possible, I ran all the way home and brewed up a very strong cup of coffee, before going off to bed.

It turned out that wasn’t actually a good idea, because it kept me awake half the night, magnifying the withdrawal symptoms I was already suffering! I managed somehow to get through the night and off to work in the morning, practically crying on the bus, because that was when I always had my first, ritual, smoke of the day.

Thank God there were no tobacconists between home and the bus stop otherwise I would have been away again. This went on for about three weeks, during which time I had fights with my Saturday night mates, I sat at work most days gazing out of the window with a stupefied expression and a tightly rolled piece of paper in my mouth, and I ate vast quantities of food, just to occupy my stressed mind.

At the end of the three weeks, I had put on three stone and was starting to look like the Michelin Man! So, in desperation I started smoking again and I felt wonderful, and my mates felt wonderful, and I stopped eating so much so that my weight started to go down again.

It was another fifteen years before I had another, this time final, go!

By now I was married, with two kids. The mates I used to go out with had all moved on, most of them getting married like me, and I was very much aware of the dangers of smoking, something we were never told about when I was young!

The way I did it this time was to decide, about three months beforehand, on the date I was going to pack it in. Then, every day I would hype myself up, telling myself I had 72 days to go, 58 days to go, 14 days to go, right up to the night before the chosen day. I then took the pack of cigarettes out of my pocket and threw it on the fire, (I knew if I had any with me in the morning I’d be off again).

Because I had fully prepared myself this time, I went to bed that night and I have never touched a cigarette since that day, forty-five years ago!

Had I kept smoking, I doubt if I would be alive today, (but as it is I’m frighteningly fit), I would have spent hundreds of thousands on the damn things and our home would be stinking of smoke, which I wouldn’t even notice.

I’m now far enough away from it for people who do smoke to look decidedly silly with that smoking little tube in their mouths, and that helps to focus my mind, not that it ever occurs to me to start again now, thank goodness!