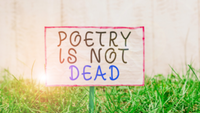 Poetry is just like art or music but uses written words, rhymes or music to create images & feelings - happy sad or otherwise.

If you can remember as a kid singling simple rhymes like "Twinkle Twinkle Little Star..." or "Bah Bah Black Sheep Have You Any Wool..", then you've already been exposed to the world of poetry.

Of course we can get a little more sophisticated and look at the historical speech in 1963 given by Martin Luther King, Jr... “I look to a day when people will not be judged by the colour of their skin, but by the content of their character.”

Strictly speaking that's a very emotive speech, but at the time particularly, it resonated with millions of people not only in America but around the world. It painted a picture - a very clear one at the time to end racism.

If you've ever considered travelling to check out AU's remote outback towns, Silverton NSW, while not huge, is not only famous for its history in silver mining but also because it has starred in many iconic Australian movies shot in the area such as Razorback, Mission Impossible II, Mad Max 2 and Priscilla, Queen of the Desert.

In this very engaging poem, Brian Lee shares his personal experience of this remote but classic 'Aussie outback town'!

The urge to travel and see this great land of ours also has side effects... Like being creative!

Ralph Benz and his wife Barbara used to actually run a caravan park but ultimately decided they'd rather be travelling having seen so many people do that and heard so many stories about 'life on the road'.

We caught up with them in Yass NSW @ the local Showground where we all stayed for a few days.

Ralph wrote and narrated this great poem which they've also made into a calendar.

Are you an 'early riser'?... Do you love to exercise first thing in the morning?

So many people do these days for all the health reasons we know about, while some... well, they like the socialising and getting out & about and 'look at me in my sexy gym outfit!

But according to Brian Lee, at the end of the day many of us forget what really matters in our weight loss goals.

POEM: An Attitude Of Gratitude!.. by Brian Pickering

When Kaye and I set off on our 'zig-zag' tour of Australia (via Dan Murphy's!) mid 2019, the plan was to stay for a week or two - maybe a bit more - in places we really liked. We figured this would give us enough time to explore an area then move on.

A slow drive North and we ended up in Cairns for 4 months. Eventually drove south to a pre-booked caravan event in NSW then COVID hit, so we got 'locked down' in Toowoomba for 6 months. After lots of discussion we eventually agreed...
"No more than 3 months ANYWHERE!" ... and headed  north again to 'check out' Hervey Bay!

Language, especially English, is pretty complex when you think about it. So many words that all have the exact same meaning, but depending on the context it can often be taken the 'wrong way'!

Brian Lee has come up with one 'very small' word that has so much meaning, depending on how it's used...