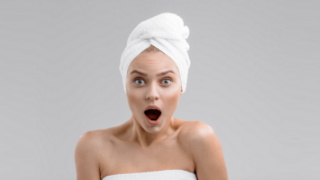 There are no secrets in a shared bathroom!

The amenity block in the van park we just stayed in had a modesty curtain separating the toilets from the showers. The cubicles were not designed for changing in and so you had to dress and undress in the common area. Hence, the curtain.

Like Dorothy in the Wizard of Oz, you want to take a peek and see what’s behind the curtain.

I was behind the curtain getting ready to have a shower...

Doris, having just arrived at the park, made a beeline straight for the dunny. Making no attempt to mask the sound, at first I found all the whizzpopping and quogwinkling confronting. But the more she frothbuggled and whoopsywiffled, the more I admired her ability to let go - both literally and figuratively.

As someone who deals daily with shit shame, perhaps I too could learn to let go a little and let out an occasional crodsquinkle.

Fully undressed, I was just about to step into the shower cubicle when Doris, who was curious about what was behind the curtain, popped her head around for a look. From her reaction, she found my titsjigglers and fannyphoofer just as confronting as I’d found her snufflebombing, or at least that’s what I first thought as I watched the red heat of shock spread across her face.

Having heard her in all her vulnerability, it seemed only fair that she had seen me in mine.

I was standing under the hot water when Doris’s obvious embarrassment suddenly made sense. Until she popped her head around that curtain, poor Doris must have thought she had been alone on the loo.

Vulnerability on the road isn’t just about finding safe places to camp or making sure there’s enough fuel to get you from one outback town to the next, it's seeing your fellow camper’s wangdangler and squifzippler and occasionally letting out a crodsquinkle in the company of others.