Do Women Talk Too Much?! 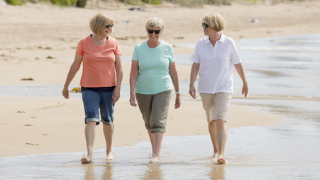 Women love to talk don't they?!... All right ladies...  Before you get out your daggers, I ran this blog by my wife of many years, Kaye.

I’ll admit initially she ‘cringed’, but then said, “It’s because we’re empathic, we’re listeners … We understand … We actually hear what’s being said ‘between the lines’ … and sometimes men don’t!”

The reason I say women talk too much was brought home to me after an initial six-month stay in Hervey Bay, Queensland (we travel full-time on the road).

I’d started doing early morning walks for general health reasons and while not a ‘marathon’, the walk I did was next to the beach on two purpose-built walkways through a semi-tropical forest called Tom’s Walk and Cooper’s Walk (photo below) in memory of two young kids who sadly succumbed to brain cancer aged six and eight.

My ‘morning meditation’ while walking consists of saying out loud how grateful I am for what I have. A good life. A wonderful wife.

In fact I wrote a short poem called ‘The Gratitude of Latitude Here At Hervey Bay’. 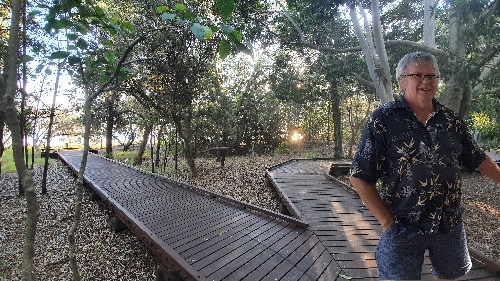 Each morning as a number of people were doing the same walk, winks, nods and ‘Morning’ often with a smile were the ‘go to’ way to politely acknowledge others on the day.

But what I’ve found most interesting is the ‘morning walk chat fest’.

Basically what seems to be a husband and wife walking together, more often than not the bloke is in the front, the wife is following.

There’s no chat. The wife usually smiles and quietly mouths ‘Morning!’ as we pass each other!

When I come across two guys, they might be walking together but there is very little — if any — chat. Usually a curt acknowledgement, but not much more.

Then there's the small group of ladies. My observations have been that generally they are not mum and daughter but ‘besties’. And boy can they talk!

Nothing wrong with that, I guess. These women were walking fast and talking fast at 6am in the morning, hardly taking a breath and chatting about everything from clothes, cooking, kids, work and very quickly taking a millisecond break to smile, look at me and say ‘Morning!’ before getting immediately back to the chat!

One morning I upped my pace to keep up with three ladies walking ahead of me. I admit that sounds suspicious, but I assure you I was not stalking. It was more in an investigative ‘what on earth are they talking about’ sort of curiosity!

I really wanted to know just what these women were talking about so endlessly, but to be honest I found it hard to keep up.

They seemed to flip from one idea to another. Clothes, shopping, then … “Did Bob ever call back?”, then “… it was the best meal I ever had” then “darn kids are giving me grief!! …” and then some stuff about work.

Clearly they all knew what the others were talking about, but it was not meant for my ears.

As my wife Kaye says, “Women listen and know how to communicate”.

I guess that’s a good heads up to us blokes who often talk but don’t really listen. Apparently!