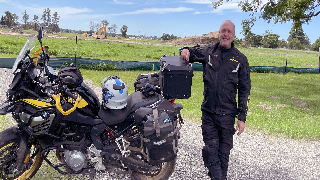 My passion is local travel and always has been. Motorbikes go back to when I was 18 riding to work at Coffs Harbour Television, where I started as an apprentice cameraman. And in recent times in the last three or four years I've been getting into adventure bike riding.

People often ask me “what’s adventure bike riding?” - well to put some context into that… motorbiking basically falls into three categories. There’s the road stuff, which is where superbikes are and where all the really crazy people are.

And then on the other end of the scale you've got the off-road guys who are also just as crazy on those little bikes that literally go off road and cut through forests and tracks and that sort of thing.

And that’s where you’ll see those big brand name bikes like the Suzuki GS’s, BMW’s, Ducati’s and KTM’s that basically travel around Australia and they're just as capable on bitumen as they are on dirt and gravel roads, but not as capable totally off road and won't really keep up with the sports bikes on the open highway!

So it basically means you can go and check out all those beautiful parts of Australia where you usually can get a four-wheel drive into, but you don't have to be a full ‘off road’ guy.

The other good thing is these bikes are big enough to let you carry some overnight camping gear and a few supplies.

Recently a couple of mates and I decided to take a trip up to the Gold Coast and back, over the long weekend, predominately on dirt roads.

So we travelled from Sydney on the Friday via all the back roads, no highways and a lot of that was dirt with some amazing views you would just never see in a normal car.

We arrived in Armidale on the second day, then off to Tweed Heads where we over-nighted then over-nighting via Kempsey then back to Sydney.

And each day was in the vicinity of 550 to 600 kilometres so around 8-9 hours in the saddle!...  which is ok with a few short breaks along the way but I wouldn’t recommend that if you were towing a caravan!

STAYING SAFE!...
But we’re also very keen to make sure we ‘stay safe’ just in case something happens. 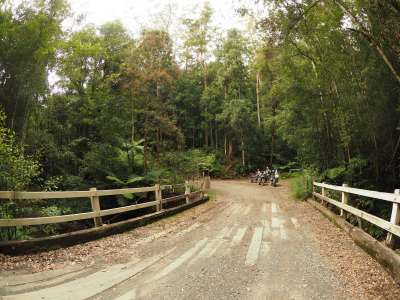 Keep in mind the sort of trips Adventure Bikers or any off-roaders do for that matter are out of range of the standard phone towers.

The good thing though is that with all the technology around these days we’re actually much freer in so many ways to do more than we've been able to do in the past.

I grew up in the Bellingen Valley and all those beautiful mountains around Dorrigo, Waterfall Way, the Armidale Road.

As a young man when I was riding my little 250cc Honda I would have never have gone off to explore anywhere, because unless I knew someone like an old logger working out there, I didn't know that part of the world.

And if I did go out there and hurt myself, then it was all over red rover because no one would know where I was. Back then of course there were no mobile phones.

So for me safety is a ‘no-brainer’ when out and about on the bike. Or even if you’re just back-packing. 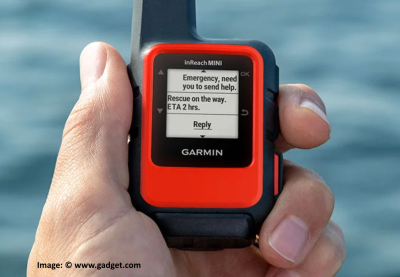 I actually have an EPIRB* device called the Garmin inReach Mini GPS Satellite Communicator and Tracker.

Now, what that does is it not only tracks me when I activate the sharing function, it also gives me the opportunity if there’s a problem to use an emergency button that can alert whoever I select or relevant emergency services.

It only works via satellite and doesn't use the telephone networks at all.

It's not expensive either with various monthly plans – especially if you get out and about as often as I do! It’s for your own safety after all.

My wife is not a motor-biker. So when I go off-road she’s back at the house in Sydney and naturally worried about me. Worried that I'm going to hurt myself. But in fact she can actually track me down. Literally!

The GPS unit sends a ‘ping’ to the satellite every few minutes and all she has to do is log-on to the relevant website and see where I am. 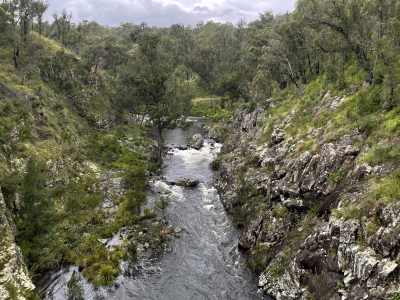 And if I don't move, it also allows her to text me through the same service in case she’s concerned about ‘no movement’. Maybe I'm stopping for lunch or a comfort break, I'll usually send her a text to let her know. 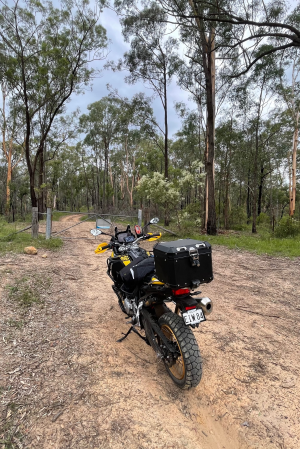 But the best thing about all this technology is that I've got the confidence to go more places.

In fact I’m really glad I have the GPS unit because recently, I did have a fall.

I was riding along nicely with some mates then suddenly had to come to a stop. As I did, I hit some sand and down I went with the bike falling on my leg… OWWWCH! It turns out it was a crush injury of my lower calf, but at the time, I felt like it had snapped.

I was about 30 kilometres into the forest on a trail, not on a road and there was no way an ambulance was going to get to me. Although quite painful I was actually able to ride back home – albeit slowly!

So if the worst thing had happened, then I would have probably been helicoptered out.
Just by hitting the emergency button rescue services would have known exactly where I was.

Anyway, injuries can and do happen in most leisure/sporting activities but the take-home point of this story is whatever you do away from mainstream society – hiking, sailing, 4WD’ing or Adventure Bike Riding is… as the old saying goes better safe than sorry, so “Be Prepared” and stay safe out there!

ORIGINAL PODCAST WITH PICTURES on Food-Wine-Pets-Travel