WOW!... At Last A Weekend Away! - Brian Pickering & Kaye Browne 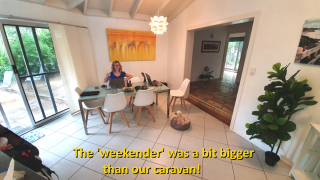 Living full-time in a caravan for the past 2.5 years, for some people might seem like a ‘chore’ or ‘too hard’.

The opportunity to catch up with long-time friends Col & Jenni for a weekend away ‘somewhere’ different in a holiday rental was too good to pass up. We booked a house at beautiful Rainbow Beach QLD. Which is a small coastal town with a population of just over 1,400 people. There’d be just the 4 of us, plus our dog although the property sleeps up to 8 people, has a pool, BBQ and has all the mod cons plus it’s just a short walk to the beach!!

We planned to stay 3 nights and packed way too much.  Why so excited? To be honest I have absolutely no idea apart from the fact we’d be catching up with long-time friends! 😊

I guess it’s the same as when you are ‘stuck’ in a house, you often look forward to day trips on the weekend or mini breaks over a week or so – whether camping/caravanning or simply renting somewhere!

It's all about ‘change’. And while we really do love the ‘slow-mad’ life on the road (via Dan Murphy’s) we were looking forward to a short break in a *GASP*… house!

You see after our time on the road we both basically said, “can’t see us living in a house anytime soon”.

Our time in Hervey Bay has confirmed that, even though we will move on at some stage to explore more of this amazing country - but taking the time to get to know people in the places we stop over is what we enjoy most.

Locals told us we’d “better move fast” if we wanted to actually get to Rainbow Beach as rising flood waters could force roads and bridges to close soon – just as they’d done barely a month before.

Ever optimists, we predicted the BOM people could have it wrong and we’d have a great weekend regardless of a spot or two of rain.

The trip from Hervey Bay to ‘the Beach’ is via Maryborough and usually takes about an hour and a half - as long as the bridge over the Mary River at Granville is still above the water line - so, we set off early Friday morning.

It took a little longer given the steadily increasing rainfall but we made it easily, albeit early. The very nice Rainbow Beach Realty people were happy to let us in several hours before the usual check-in time of 2pm.

And tah-dah we’re in a HOUSE again!... Sooo big we literally got lost trying to remember which room was where. Even poor little Chica, our 17.5yr old Toy Poodle was confused! 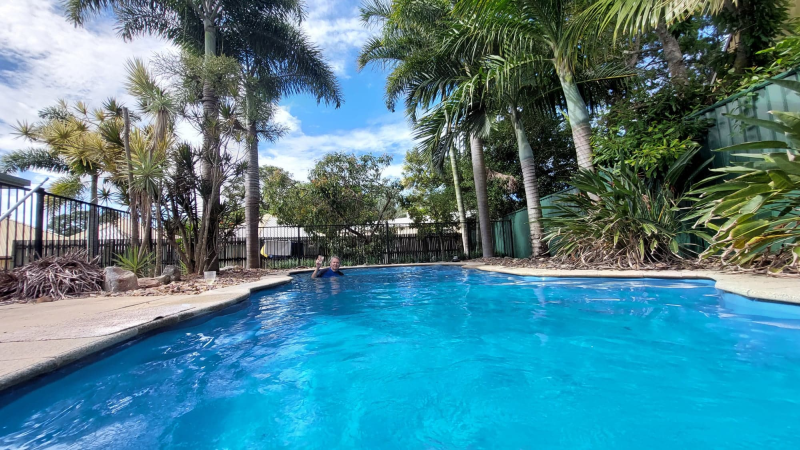 Image: Brian having a bit of 'pool time'!

But soon after arriving we got a call from our friends in Brisbane who were planning to drive up the next day.

“Hmmm… well it looks like the roads into and out of Gympie are closed due to flooding, so we may not be able to get there but we’ll see what the news is tomorrow and maybe pop up for a day on Sunday!!” ☹

We were all VERY disappointed. This had been planned and booked for the past 2 months.

However, being the optimists we all are, we ended up having ‘Zoom drinkies’… a virtual catchup. Not quite the same as in person but the next best thing.

Well that Sunday catchup never happened.  Roads north and south out of both Brisbane and Hervey Bay were inundated by incessant rains of biblical proportion – even worse – we might not even be able to get ‘home’ to Hervey Bay as the only two routes were closed.  Both Gympie Road and the famous Maryborough bridge, the latter barely visible with only the very top guard rails just above the raging water.

Our original weekend away had to be extended… for how long we had no idea!

Our 17.5yr old ‘fur-child’ Chica – the most demanding little Toy Poodle ever - was suddenly very unwell with what we suspected and was later diagnosed to be HGE or Hemorrhagic Gastroenteritis basically a stomach infection causing ‘bloody poos’ ☹ - It is also life-threatening if not treated quickly!!

Sometimes Facebook really can come to your rescue as within minutes of posting an urgent query on the ‘Word’s Out Rainbow Beach’ page, several incredibly helpful locals recommended we contact the highly regarded Tin Can Bay Vets, a short 35min drive north. Gotta love that community spirit.

So while we were still reeling from all the drama people were going through in Gympie, Maryborough and elsewhere due to the floods, suddenly… while not quite the same - we had our own ‘personal drama’ to deal with. 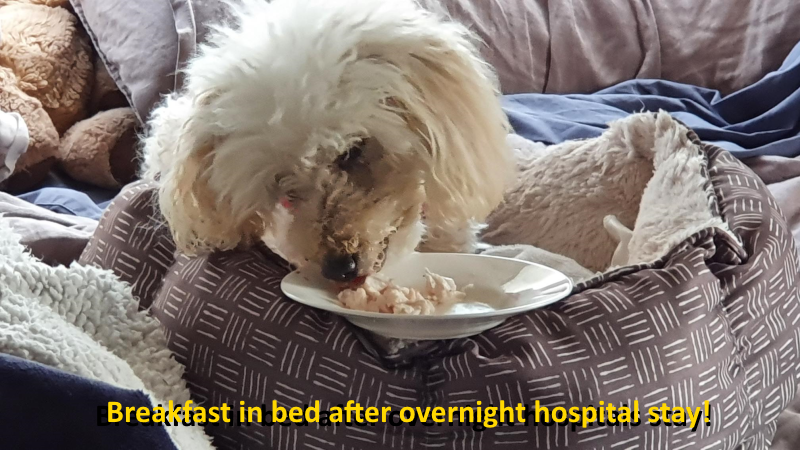 After a nervous and largely sleepless night we got the call from Dr Anya we’d hoped to hear, Chica seemed to be doing well and that she would be ok to go back home with us along with some medications.  In fact, we could hear Chica in the background – vocalizing as the vet called it.  We knew it was Chica shouting to get out of her crate and back in our arms!!

Ironically, we managed to enjoy 2 days of sunshine on our ‘extended break’ and even explored the fabulous region a little – but we were more than ready to hit the road as the floodwaters receded – even opting to use the longer route via Gympie as a precaution – and it too is a very pretty town.

WHEW!... Home at last – and yes Chica is improving daily despite driving us nuts trying to find ways to hide her anti-biotics and other meds. That nose knows!

And while we were safe in that lovely Rainbow Beach house, it wasn’t quite the carefree catch-up we’d planned.  We’ll have to try it again once storm season has passed.

Meantime our hearts and thoughts go out to all those people who have personally suffered in some way or lost loved ones in these devastating floods, our thoughts are with you all as we count our own ‘lucky stars’.