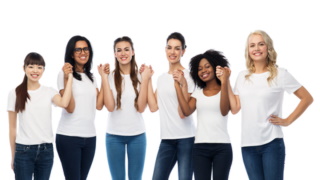 First up, my wife of more years than I'm allowed to mention here came up with the title of this blog. Thank you darling

And that was because I mentioned to her the other day that I’d had a dream about all the things women have to go through - things they have to ‘endure’ - throughout their lives.

And we men… hey I include myself here!, are totally oblivious to it. Totally!

Let’s start with menstruation. Young girls as early as 12 - sometimes even younger can start the process, essentially a biological signal that they are ready to conceive… ultimately resulting in becoming a mum!

In fact the earliest recorded ‘youngest girl to give birth’ was in Peru in 1939. Lina Medina was just 5yrs and 7months of age! (Wikipedia).

As all women would know, not only is menstruation a damned nuisance, but it can also at times be embarrassing… so I’m told. Especially young girls at (say) a mixed boy/girl school

Secondly, breasts. Some have ‘em… some don’t! Well not very well formed. Why?...

We may never know, but as women grow older, the need for support (bras) is paramount for not only comfort, but also looks. Then as time goes on, the dreaded mammogram!!

In Australia the Cancer Council recommends breast screening from the age of 40 every 12 months. Now from my experience… sorry… from what I’ve been told, it is about as much fun as having a colonoscopy, or giving birth apparently!

But before that of course is sex. Yep… without going into details for obvious reasons, I can totally understand why ‘the first time’ is not necessarily the best time for most women. And I guess the same goes for those that choose to not be intimate for some time for whatever reasons or for medical/mental reasons as the case may be.

From there we come to birth. I happen to have been present at the birth of 2 of my kids. A privilege I cannot ever forget. It’s one thing to watch a birth in a dramatised movie or even an educational video, it’s another to see it first-hand.

Jaw dropping is an understatement!... Sadly of course some births or even conception don’t quite go according to plan which no doubt has a life-long impact on that person.

For those who do go full-term…  the emotional side of finally becoming a ‘mother’. The provider, carer and (hopefully) lifelong mentor to this ‘cute little bubba’!

Then the physical side of everything from breast feeding, to cleaning up the poo, toilet training, teaching the basics about life & love, schooling, then dealing with the teenage years - different for both boys and girls of course!

Oh & let’s not forget cooking, cleaning, washing and looking after hubby and... in many cases these days, trying to hold down a job at the same time… albeit with wage discrepancies and gender bias!

Of course life ‘goes on’.

My experience of women as they grow older - and that includes my mum, my sister and my wife & daughter - is that they always like to ‘look nice’. Whether that’s ‘look sexy’ or just ‘pretty’ depends on the person of course.

But clothes, makeup, hair etc can take a big toll on personal budgets and more importantly, self-esteem. Women really do want to look ‘nice’ - not just for themselves, but those they meet and see on a daily basis.

Then we get into the ‘mature’ stages of life. Many females love their long hair… it looks sexy, is very ‘girlish’ but as they get older, many prefer to get what is literally a ‘short back and sides’.

So much easier to look after, right? Hmm ... well that’s up to you.

Blokes? If we still have most of our hair at 60+ that’s great (thanks mum!) If not? Who cares

Far from it. According to The Mayo Clinic, “Menopause is a natural biological process. But the physical symptoms, such as hot flushes, and emotional symptoms of menopause may disrupt your sleep, lower your energy or affect emotional health.”

One more thing we blokes don’t have to worry about right?... Except of course it does affect relationships in the bedroom for many people…. But we can leave that for another time

So while I’m pretty sure there are many MANY more things women go through in their lives - physically, emotionally etc that men never do, it’s pretty obvious women, females, girls whatever term you want to use, are definitely a ‘Superior Species’...