Why We Should All Write A Biography 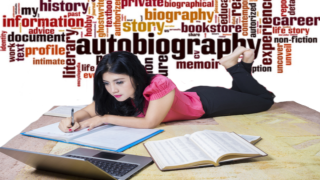 Ever read an ‘autobiography’ and thought “Wow! How amazing!” or “Oh dear, how sad” or even “Gee that could have been me!” Have you ever wanted to write your own life story?

When we talk to people, especially people we’ve either just met or have started to become friends with, we all ultimately reveal a little about ourselves a bit at a time. Your life, your story. The first question one would ask is ‘Where do I start?’ …

The second is often ‘Where should I stop?’ and occasionally, ‘Who cares?’ Because telling one’s life story can either sound like “Oh woe is me” or “See how wonderful I am?”

When I considered my life and the experiences I’ve had, I didn’t want my story to fall into one of the above categories. For me personally, I really wanted my kids, grandkids and other family members and friends to at least know what I’ve achieved because I feel so blessed (not a word I use often) to have done all the things I’ve done. I’ve learned so much from those experiences!

I’ve seen less-than-blessed people in my time — especially the few years I spent in Papua New Guinea in my late teens and early-20's as a location recording engineer doing local indigenous stories for Radio 9PA Port Moresby in several remote villages where it was obvious life was lived day to day.

It had a significant impact on me going forward.

No food? “Sadly today we have to finally say goodbye to our ‘pet pig’ ” — a true story and very sad for all concerned.

That one life event made me realise — even as a 19-year-old — just how ‘lucky’ we were in countries like Australia and New Zealand. But life does move on every single day right? And given my background is radio/music/TV production etc., I’ve somehow managed to ‘sample’ work in several countries including the United States, United Kingdom, Spain and of course Australia.

My life’s goal has never been to be the ‘biggest or the best’ in what I do, rather to contribute to each and every project with whatever skills I have to help improve each outcome — whether a commercial or private project. It probably explains why I’m no ‘rich lister’ but at least I have many ‘rich memories’. As they say, you can’t take it with you when you go …

What have I done? Does any of it really matter? Not really, but again I can say I’ve had some pretty amazing experiences in my time.

I recall my very first celebrities — Googie Withers and John McCallum, who were doing a radio 2NX Newcastle interview. I was a novice and nervous 15-year-old and all I did was adjust their microphones.

Over the years there has been various commercial radio work as a ‘panel operator’ through to 9PA Port Moresby, PNG as a recording engineer for local educational stories as I mentioned above and plenty of other ‘radio stuff’, then sound effects guy with ABC doing national radio drama (remember that?!) and helping start 4MMM Brisbane way back!

Since then it's been mainstream radio/TV production … You could say it’s been a very ‘busy bio’.

The most interesting times as a young bloke were those years spent in the US, UK and Spain as either an assistant or a full-on music recording engineer/producer. It would be too easy to embarrass myself and drop too many names, so I won’t … At least not before I really get around to writing something!

Suffice to say I actually learned a lot from the so-called international stars. Not so much about how ‘famous’ they were but more about how ‘fame’ itself is actually a very difficult thing to handle well and that — to be honest — not being ‘famous’ is actually pretty good really.

While I did eventually end up working in one way or another with many many big music stars of the day, I’m perfectly happy having done and experienced that. I’m even more happy with my current very ‘quiet’ lifestyle living life full-time ‘on the road’ (doing basic online work to pay the bills) in our modest 20-foot caravan with my former journalist/newsreader wife Kaye and our equally gorgeous ‘baby’ Chica — a 17-year-old toy poodle. * (see note below)

I’ve never been rich — or very poor — but the one thing my dad did teach me was that old saying:
“I once complained I had no shoes, until I met a man who had no feet”.

Hopefully when or if I do ever get around to writing a proper biography, I’d like it to show how the experiences I’ve had in my life shaped me — for better or worse — that can be passed on to future generations like my grandsons and granddaughters, so they know where they’ve ultimately come from.

Let’s face it, that’s what a true autobiography is all about, right?