When I Realised I Was Gay!.... Daniel Preston 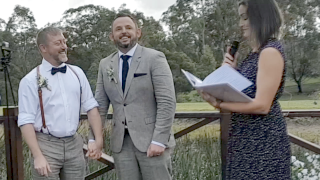 Going back as far as I can remember I believe I started to realise I was gay from a quite early age… maybe ten or even slightly earlier than that.

And the only way I can really distinguish that thought was I remember watching television and then thinking “hmmm.. that guy’s attractive” but not really realising what that was all about.

But I remember I wanted to watch a particular TV show because the guy I liked was in it.

And then I started to realise I found this person physically attractive and as I got older by the time I hit  9 or 10, I would have been in year 5 at school.

It was pretty early and I repeated that year because of an ear operation at the time and I dropped down in my class and had to repeat it.  And there was a boy in my class and we both hit puberty around the same time .

I remember that because our voices broke about a month apart and our teacher embarrassed the shit  out of me by noticing that and telling the whole class what that meant!

So that was, I think, the beginning where by the time I got to high school, I eventually started to come to terms with all that.

But I knew it was something I had to hide

I could sense the public opinion especially with some older people saying crazy things… not from my parents but from other people our family knew.

And they were pretty horrific. Like ‘what they would do to gay people during the war that, basically gay people would not go home, they would be left in the ocean’ and stuff like that…

And I remember that scared the absolute ‘be-jesus’ out of me.

Those memories still sit with me today, sadly and from that moment on I hated those people and I've never had anything to do with them since.

So from that point on I really had to hide it.

But I stupidly confided to a friend at school who wasn't gay, but I knew he had a friend that was ‘out’ as gay and he was same age as me so I thought I’d be brave enough to tell my friend because I thought it might be good for me to talk to his friend. Unfortunately he then told his girlfriend.

And it was pretty horrible, and I'll never forget that moment, being pinned up against a brick wall with probably 30 girls yelling stuff at me, and I was covered in strawberry milkshake and everything - It was pretty bad.

It definitely contributed to a form of PTSD and to this day I still don't even like to hold my husband's hand in public.

I don't show public affection with my husband Will(iam). I don't kiss Will in public. 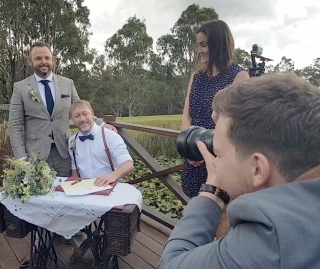 And the only time my family have ever seen me show any sort of passion towards him was on our wedding day and I was terrified of even doing that, in case some of the guests weren’t as welcoming as my parents.

Interestingly these days a lot of people are starting to identify as gender neutral and they refer to themselves as ‘they or them’ or LGBTQ … xyz!! or whatever!!

It's very confusing, but if that's who they are, then you can only accept them for who they are.

I think it's a generational thing too. Older generations – maybe ’baby boomers’ & older haven’t all been that accepting of what gay people – male & female - are all about.

But ultimately I’m happy with who I am. I’m married to Will, the most wonderful person in the world, and we both love and look after each other through thick and thin.