What's Life REALLY Like In A Caravan Park? - Brian Pickering 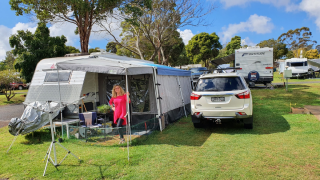 Having been ‘on the road’ for 3 years now – from Sydney up to Cairns via Mackay and of course plenty of overnights and occasionally weekly stays at all the little places in-between then down to Toowoomba for 6 months, ‘locked down' by the COVID restrictions, then back up to Hervey Bay, while we haven’t moved an awful lot as many ‘nomads’ do.. (we call ourselves ‘slow-mads’) we continually enjoy meeting new people on an almost daily basis.

Something we realised today that you simply do not do living in a house in suburbia!

We’ve met our fair share of solo females who we’ve done stories with plus families with way too many kids and whizz-bangers (you know those rental vans that go WHIZZ.. when the door opens then BANG!... when it’s closed – usually around 3am!)

And then there’s the ‘full-time’ grey-nomads. Those that somehow feel they ‘own the park’ and the latest holidaying families that just come in for a few nights and  ‘have NO idea what they are doing’!!

So let’s start with a couple of things…

* STOLEN UNDERWEAR!
While most modern caravans have a washing machine and you can hang the washing out in or near the van, most ‘temporary’ visitors use the traditional laundry and hang stuff on the park clothes-line to dry – just like you might at home. But beware!... some ‘visitors’ might like your style/brand of underwear and – as happened to a friend of ours – they steal your latest ‘glam-wear’ as if it was left for anyone to simply take!! WHAAAT!

Most people are pretty aware that in a relatively confined space such as a caravan park, that everyone is close together. You’ll always hear the occasional car door or boot banging closed or mum or dad yelling at the kids .. ‘STOP THAT – COME HERE NOW!!’ - it’s just what it is, and you deal with it.

But most people agree that after 8pm at night and before 7am in the morning, we all like to think things will remain relatively quiet.

Nope… not Narelle & Bob* who were staying in one of the cabins at our park… (*names changed to protect the guilty!!) – Seems they may have had a disagreement overnight which escalated into a full-blown argument. Well this started around 11pm… outside on their deck and seemed to go on and on and on until around 4am, when suddenly a car started and drove off. In a hurry it seems! – Well at least it was pretty quiet after that. What happened next?... Not sure but it was VERY quiet the next night – and yes we were concerned for both of them.

* THE ‘COULDN’T CARE LESS’ BRIGADE
Yep… we’ve all seen them. Those people who ignore the 5km speed signs in a park and just speed through totally ignoring the fact there are (rightly or wrongly) kids and sometimes pets running around. On the other hand with the latest evolvement of motorised scooters, this problem is becoming even worse – kids – and sometimes adults – zooming around totally unaware of anyone else around them!

The other end of this ‘C-G-A-F brigade’ are those that don’t flush toilets, throw rubbish in the wrong bins or just leave it behind on the ground when they leave!... nice eh?? That’s just one of the reasons we never use community camp kitchens… G-R-O-SS sometimes!

* THE WHINGERS
And while that last lot sounded like us having a ‘whinge’, I have to say far from it.
It seems some people just love ‘whingeing’ on a daily basis… complaining about EVERY little thing!!

While some parks are apparently ‘perfect’ (according to various online reviews), some of the older ones – like where we are staying right now – do have their issues from time to time. But what some people don’t understand is what might be going on ‘behind the scenes’.

Maybe a lack of trained staff. Family issues with the owner/s that might create ‘oversights’ or some other issue such as financial trouble etc.

And while it’s fair enough to argue “Hey!... I’m paying to stay here – I want everything to be perfect”, sadly life is not quite like that every day!

But for us, life on the road – well in a caravan park albeit temporarily – is a real eye opener into people and people’s personalities that you rarely get to experience on a daily basis in the ‘burbs. Plus, in a small community like Hervey Bay, it has its own 'pool' of very special and interesting people.

To be honest we quite like it! – VERY interesting and yes it has its moments, but right now, I have to say ‘we LOVE it!’ 😊