What A Load Of Rubbish! - Brian Pickering 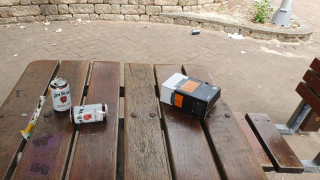 What is it about people today? … not just kids. Young adults & some families too!

It seems everywhere you go, someone has ditched a cigarette butt, a bottle of beer or tin of coke or in this photo I took on my morning walk...  some Jim Beam & a wine cask, maybe a bag from Macca’s or a Domino’s Pizza box and more. In fact, a lot of the junk we see strewn around the place is also thrown from cars… especially cigarette butts!

Why? – WHY!!!... How hard is it to simply carry the stuff you just bought from a shop for a quick picnic or snack, to then just go and dispose of it in the proper place?

And even if there are no bins nearby, why not just take it home? Too lazy perhaps?

Well I did a bit of looking around (thanks Dr Google!) - and I must admit I’m VERY surprised to read a research paper in the USA that basically said, back in the 1950’s and 60’s it wasn’t such a big deal.

People were a lot ‘tidier’ overall. Perhaps that’s because we didn’t have the mountains of take-away options we have today. Or maybe it was ‘better parenting’ where we were told “don’t forget to pick up your rubbish!”.

I’m starting to think it’s a bit like the mentality of those people who just leave shopping trolleys all over the place in car parks – and streets sometimes. Their excuse is “we don’t wanna put anyone out of a job!” – yea right ☹

And while some of the 10 cent initiatives for recycling cans and plastic bottles is a great idea, it seems many people just don’t care any more. “Ten cents?? Not worth the trouble!” I’ve heard some kids say, although I’ve also seen others jump at the chance which is a good sign!

In fact on my daily walk, there is one lady I’ve seen who goes around picking up disposed of plastic bottles and cans and puts them in her garbage sized back-pack. She also walks around the streets and checks out people’s bins on collection day (which apparently is illegal but hey!...)

She reckons she makes about $25-$30 a week as a bit of pocket money doing that and still gets to exercise! The best she’s ever done was after a recent New Years Eve event in the local park where she topped up her pocket money to the tune of $50.

No doubt council were pleased to see a little bit less rubbish the next day!!

If you work it out, that’s a LOT of plastic bottles and cans people have selfishly thrown away.
Puts new meaning into the word ‘tosser’ eh?

But seriously, how can we solve this problem? More bins? Doubt it. The photo above was taken no less than about 5mtrs from a council bin. A 10 second walk!

But just like climate change and all the apparent global effects of that, it seems ‘too little too late’ might unfortunately be the case with random rubbish.

And yes, we all know there are those among us who really couldn’t care less, so unfortunately, we have to deal with that – *SIGH* life is far from perfect eh??