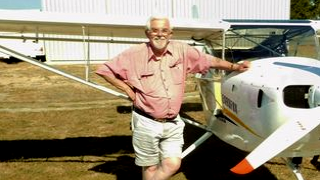 There is nothing quite like swanning about the sky in a glider! I speak from experience because I used to own one many years ago and I can assure you, drugs have nothing to offer you, when measured against the sheer pleasure of being ‘up there’, in total command of your own destiny!

There’s no one who can be called on to help, in the unlikely event that you get into some sort of trouble, but on the other hand, no one can tell you where to fly, how high you should go and what sort of tricks you can get up to either.

Yes, it really is a marvelous feeling, one of the very few experiences where such a scenario is possible, you are entirely in charge; if you make a serious mistake you may die, but if you have been properly and fully trained, you will know instinctively and immediately what action is necessary to put things right again.

And of course, if all else fails, you are sitting on a parachute – a very friendly last resort!

I learned my flying skills in Wiltshire UK, on an unused Royal Air Force airfield near a small village called Keevil.

It was a super site for the sport, a nice flat area for take-offs and landings, with fully tarmacked runways, ready-built accommodation, left behind by the wartime flyers and beautiful countryside all around, to enjoy once you became airborne.

I’m afraid I spent many weekends there, over quite a few years, leaving poor Jacqui my wife home alone with three very young kids, something I would think twice, (or thrice!), about doing now, but I was only in my twenties and thirties then, an age when it’s hard to take such considerations into account!

The Bath & Wilts Gliding Club, as it was called, was quite a small one by club standards, but its members were dedicated, sensible and helpful, features it’s very nice to have, from the point of view of someone like me, learning the sport!

Surprisingly, despite its small size, the club boasted one very special member, who was only a senior student at school in those days, but in later years he became the World Champion of Gliding, a title he held for many years. His name was Andrew Davis, and it was nice to know I was learning at a Club which was turning out such high class flyers!

Learning to fly gliders doesn’t take anywhere near the same time as flying a powered unit; in a plane with an engine you have so much more to learn – using the engine for a start, then navigation, instrument flying, air law, using flying maps, (they’re quite different to a driving map) and all sorts of other procedures which don’t apply to gliders.

The average glider pilot learns the basics of flying in about sixty-five flights, and at this point he/she gets sent solo. 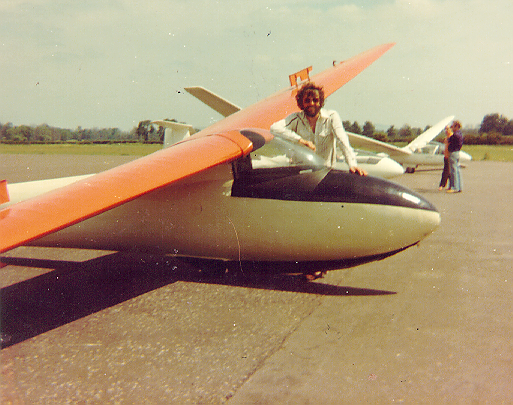 Doesn’t sound much does it, but what it means is that your teacher, rightly or wrongly, considers you to have accomplished enough experience to be able to go up in a plane on your own.

I can honestly say that it was the most exciting thing that had ever happened to me, when the Chief Gliding instructor came up to me, one afternoon and casually said, “Can you come over here with me for a moment Brian?”.

It was very naïve of me but I didn’t have a clue what was going on, until he stopped at the launching point, indicated a small single-seater glider and said, “Hop in – you’re going solo!”

At that moment I very nearly did something that I’m sure many readers could relate to, so I won’t go into details, but sufficient to say I was both scared and delighted, all at the same time as I clambered, shaking like a leaf into a completely strange aircraft, (don’t forget I had flown nothing but two-seaters up to that moment).

Then, almost it seemed, before I knew it, I was hurtling along the runway, hitched onto a large Ford ‘ute, twelve hundred feet in front of me. I pulled back instinctively on the joystick and the little aircraft soared into the air, all moves I was totally familiar with of course, after several months of learning.

The only difference – I was alone!

Within a minute or two I had reached the end of the tow and I was twelve hundred feet above the ground, hoping I knew what I was doing, which I did, proved by the fact that I am able to write this blog now!

Going solo didn’t mean I could now clear off, anywhere I wanted to of course, all I was allowed on that first day was a simple circuit of the airfield and then land again, and the same thing twice more to prove it wasn’t a bit of sheer luck that I made it, on the first attempt!

Space here doesn’t permit me to go any further now, but I still have plenty of tales to tell, regarding my flying days – I shall be writing more later!