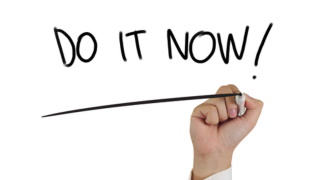 Ever said “where did that day/year go?”

As kids, it seemed ‘forever’ that Santa Claus was going to visit us again or school holidays weren’t long enough. As we get older time seems to speed up. A week goes by as if it were a day. So what can we do about it? Anything?

Well #1 would have to be; DO IT NOW! – So many people put off doing ‘stuff’ until later. Kaye & I worked as freelancers for way too long from our home in Sydney. Why? Because it’s just what we did and it was easy, but we were thinking it would be good to get away for a while. Well, that idea has turned into soon to be 3 years ‘on the road’ and no plans to return to ‘the old life’!

But that’s just us and we’re lucky enough to be able to still work online from anywhere. Of course, for you it might be anything from joining a gym to get back into shape or plan an extended holiday to ‘somewhere’ that you’ve been putting off forever!... or maybe sell the house and downsize, de-clutter perhaps and sell/donate all that unused stuff that’s been lying around for years?

So many options right? And if travel is your thing but there are still many restrictions on overseas travel, there’s this rather large country called Australia which has quite a lot to offer!

For those that have always said “I really should start making some notes about my life for the kids/grandkids” but it never really happens, just pick up a pen (remember those?) or open your laptop and start somewhere… ANYwhere!! – but do it NOW!!

Most of us are huge procrastinators. “I’ll do that after I watch the news/Netfix etc” or “Oh that can wait until the weekend” – sound like you?

With the recent unexpected passing of two longtime close friends within a week of each other - Leigh Wayper & Ted Seymour - that Kaye & I worked with in Brisbane, then hearing on the news about two cricket legends Rod Marsh & Shane Warne – both from heart attacks,  it really opens your eyes to the ‘DO IT NOW’ mantra because none of us really knows what tomorrow will bring.

And with all that’s going on in the world – not just now but every day – it makes perfect sense.

What do you think? Would love your thoughts 😊