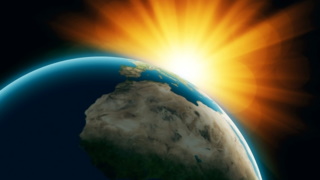 I’ve spent a lot of time over the past few years thinking about, and reading about this global warming thing, and putting together some of the many snippets I have found, I’ve come up with what I believe, in my little mind, is the logical answer to the problem, and it doesn’t owe a lot to carbon dioxide.

We have been told by experts that the earth is, at the present time exiting an ice-age – one of many that have happened over the millennia, and we are now in an era of warming.

And this was where my silly brain got started causing to consider the fact that the earth slows down very slightly in its rotations around the sun at a time when it is at its farthest from our home star, resulting in an ice-age, and the because of this, our little planet starts to fall towards the sun under natural centripetal* forces.

This can go on for thousands of years as the effect on Earth is so small, but eventually the Earth will start speeding up again as it goes nearer to the sun, similar to an ice skater spinning faster as he draws outstretched arms onto his chest, until the time arrives when the inward force of gravitational pull is matched and passed by the centrifugal force from the Earth’s orbit.

At this point the Earth is as warm as it can be, with little or no ice on its whole surface. Because of the increased speed of rotation, the Earth then starts moving away from the sun again and eventually the next ice age will arrive, a sort of perpetual motion machine, wobbling nearer to and further from the sun in a never ending cycle, only by a very small amount, but enough to affect temperatures on Earth.

Then there’s the CO2 part of the problem.

First, I was amazed to find, during my ‘researches’ that the total amount of CO2 in Earth’s atmosphere is 0.04%!

Not really a lot is it, makes you wonder how such a small amount can have such a devastating effect on everything on Earth.

Another interesting point I found out as well - every single plant on earth breathes in CO2, they have to in order to survive, just as we need oxygen for the same purpose.

Nature balances everything very nicely you see, when the plants breathe in the atmosphere around them, they extract the carbon from the CO2 and use it to build their own trunks, stems and leaves, at the same time they breathe out the oxygen part of the gas, ready for we humans to use for our own life-giving purposes, that’s a very neat little system, isn’t it.

Oh, and another small point; apparently of that 0.04% CO2 I mentioned, Australia, with all its cars and industries contributes just 3.00% of that 0.04%!

Makes one a little suspicious about all the fuss the great powers are making doesn’t it, for several hundred years we have been burning coal for all sorts of purposes with no apparent serious effect on the temperature of the atmosphere, but now, in the last few years CO2 is the great enemy, the destroyer of the human race unless we stop doing most of the interesting and fun things we have been doing before. What are we supposed to believe?

Now before anyone starts shouting at me, I point out that I do NOT claim to be any sort of an expert and I happily accept the fact that this hogwash may not have one iota of truth in it, but it was fun to work it out, and let’s face is, if you don’t like it, you don’t have to believe it!