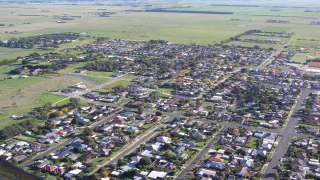 Australia is dotted with them. In any State in the country, where it is possible to live, where water is freely available, where the soil is fertile, where the climate is pleasant and the view pretty, you can bet someone will put down roots, build a homestead and throw seed onto the patch of earth which has been carefully prepared for the purpose.

And if the soil really is fertile, and the water is permanently plentiful and the weather not too extreme, you can also bet that others will quickly follow, and before you know it – you have a country town!

For any reader who is a stranger to Australia, the whole country is not desert boasting nothing but lonely, dead trees, crouching in the blazing sun, with the only moving objects being a couple of kangaroos having a boxing match near the dead tree.

No, it is, believe it or not, especially within several hundred kilometers of the sea, a rich land, rich in plant life, rich in healthy soil and rich in immense mineral wealth, hiding just under the ground!

And it is within this swathe of richness that most of the small towns have grown up, either amongst areas of forest, or pasture, or all that mineral wealth.

Most of the towns we see in the country today were established in the late eighteen hundreds to early nineteen hundreds, the time when hordes of British people were coming here, spurred on by promises of land and wealth.

As one town grew, others sprang up around it, usually about one day’s horse-ride apart, originally for the convenience of citizens of the first town, who might be going on a long trip and needed these stopping points, where tired horses could be changed for new beasts.

All that was there initially and, in most cases, were stables and a house where the horse keepers lived, making his living by charging for the exchange of animals.

These stopping points soon attracted new people, just like the original and before you knew it, another town was formed, most of them still there today, some just one or two houses now, but others as big as, if not bigger than the first town that spawned them, all those years ago.

Today, the average size of the typical country town appears to be something in the region of about two thousand people, many of whom need to travel each day to other towns for work, unless the ‘home-town’ is in a position to offer good employment locally, like the one where I live, which has a couple of large timber mills, a hospital and a country club to provide work, (though this can be unusual). 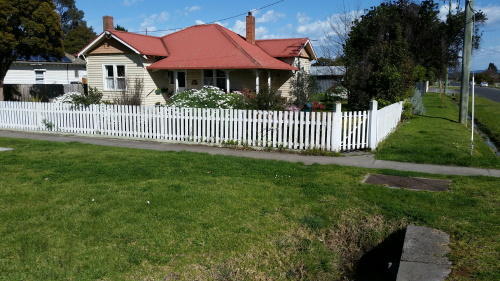 Young people tend to leave the town when they leave high school, mainly to attend some university or college situated anything up to three hundred kilometers from ‘home’, and only a small proportion of them return, once they’ve tasted the delights of the big city; sad, but a fact of life I’m afraid.

Despite everything that is thrown at them though, most people who live in the country towns wouldn’t want to live anywhere else.

There is a very strong feeling of belonging there, and many people belong to families who have lived there for generations, though with the advent of modern roads and transport this situation is dying somewhat.

Another thing the country resident gains is room!

Travel round Melbourne or any other large city and you pass estate after estate where poky little houses are crammed together so closely that they virtually touch each other.

Our home, very average for our town, and many other country towns too, sits on a quarter of an acre of land inside the boundary and a Council nature strip beyond that – in the city they’d most likely put three or four houses on our little bit of territory! Its noticeable too that everyone pretty well knows everyone in these towns, and they are always ready to help each other in times of difficulty, though they pretend to hate each other at other times! (Just my little joke!).

Finally, and more and more importantly these days, living in the country can be a lot cheaper than in the big city, though this can now be balanced somewhat by the cost of travel and fuel.

Admittedly there is a smaller choice of products in the local shops, but you CAN park right outside the shop you wish to visit. It’s all a matter of swings and roundabouts, a lifestyle that suits some might not suit others.

As far as I am concerned, I am well satisfied!