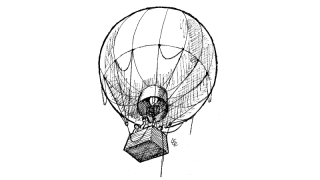 Some years ago, when my wife Jacqui and I lived at Bath in South West England, we went for a balloon flight. Easy enough to do because Bath is a major launching-point for them, and we had a friend who was a balloon pilot, and owned his own balloon.

We met our pilot in one of Bath’s parks, where he already had the balloon half inflated, and he told us to climb into the basket, not something I could do at all now, and not really easy even then, due to its high walls!

Anyway, we managed it without too much loss of dignity.

Thank goodness Jacqui had decided to wear trousers, rather than a skirt for the trip, because there were quite a few watchers standing around! 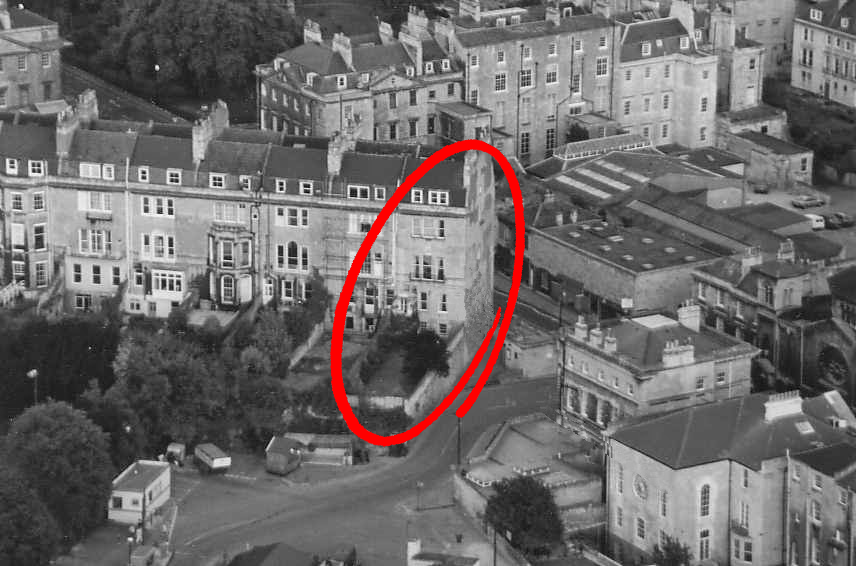 Then before we knew it we were rising gently off the ground, though in actual fact, because the balloon was so gentle in its movements, it felt more as if the ground was going down, rather than us rising. Our home was only a short distance from the launch point so we had a fine view of that as we drifted past, (the house at the extreme right-hand end of the major block, circled), then we headed in a generally southerly direction, because that was the way the breeze was going, gradually gaining height until we were at about a thousand feet above the ground.

We spent a very happy hour in the balloon, drifting silently over the countryside, with no sound of wind because of course we were travelling at exactly the same speed as any breeze, it was our only motive source, after all!

We did notice that even comparatively quiet noises on the ground below came up to us very clearly, even people chatting together were legible and we also noticed that people in various streets below would wave up to us which we answered in kind, only to set off waves from people in most of the other streets below us.

They, of course, couldn’t see the other wavers and thought we were waving to them, not the people one, two or three streets away from them!

Cows liked to chase the balloon as we drifted by though why, I have no idea, and dogs too, took an instant dislike to us and shouted insults at us in their usual barky way, obviously either angered at our encroachment onto their territory, or disturbed by the noise the gas jets of the balloon made as the pilot adjusted our height above the ground.

Then, almost before we knew it, it was time to land again, somewhere near Frome (about 13miles or 20k/ms South of Bath), because the sun was getting a little low in the sky and he naturally wanted to get his equipment packed away before it got too dark. So he started searching for a suitable field to land in, which didn’t take long, after all we were now surrounded by nothing but fields, and he soon said, pointing, “That one should do us!”, and he slightly opened the flap right at the top of the balloon using a long rope attached to it, letting some of the hot air out, and we began our descent.

This was when things started to get exciting!

The air had until this moment been pretty calm, but as we came down into the selected field, a sudden burst of air rushed past us and gabbed the balloon and its basket, with us in it, and hurled us towards the large hedgerow on the far side.

Luckily, our pilot had quick responses and he was able to close the flap and pump a little more hot air up into the canopy, causing the balloon to rise just high enough to avoid ploughing into a very thorny bush. 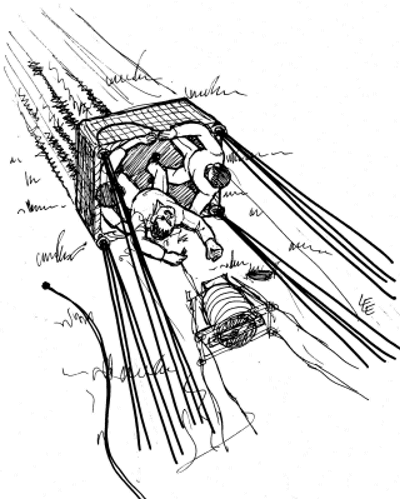 He immediately reopened the flap as soon as we were clear and we sank back to earth again, this time actually landing, in the next field. Which of course was the precise moment that another gust of wind hit us!

The effect was completely different to that first leap over the hedge; this time the wind began dragging the balloon across the new field at a startling speed, which resulted in the basket that contained us, falling onto its side, where it instantly became a bulldozer, ploughing up the field in front of us and dumping the resulting pile of dirt and grass in the basket with us.

We could do nothing but hold on like grim death, trying to stay on the high side of the basket, away from the earth and instant burial.

Again, our pilot was quick to release the flap on the balloon and we were only dragged for about twenty meters but it was one of the hairiest twenty meters I or Jacqui have ever experienced.

All I can remember, as I clambered out of the basket, was looking at Jacqui and saying, almost like a prayer – “WOW!”