We read and see an awful lot of information these days about what an awful, ugly place we have the misfortune to live in.

Industrialization is supposed to be choking the world by filling the air with poisonous fumes; despots ruling it would appear, most of the countries of the ‘third world’, are slaughtering many of their own subjects and trying to make life as unpleasant as possible for the rest of us, with their continuous states of war, one against the other, or against us!

Meanwhile, we ourselves have become the target for a dangerous new disease we call Covid19, which seems to be doing an even more efficient job of wiping out millions of people, than the despots are.

And in the background of all this, our leaders seem to be delighting in telling us that global warming is going to make life even more difficult in the future!

It hardly seems worthwhile carrying on, does it?

But wait a moment, let’s try to be a little bit more logical about all this horror going on around us. Think again about industry and all it is supposed to be doing to destroy us with its fumes and chemicals.

Take a simple example, the north of England and the Midlands; certainly you can travel for quite long distances in that part of the country and see very little in the way of grass, fresh water or clean air, but travel just a short distance to the west of that industrialization and you very soon find yourself in one of the most beautiful parts of England, the Lake District, an area full of wonderful rolling hills, magnificent lakes and quiet roads, (except for during the tourist season!), closely matched by the Yorkshire Dales, another area of great beauty just to the east of the Lake District.

I’ve seen photos from India, showing typical street scenes - masses of people, power poles amongst them, festering with miles of tangled wire, dirt everywhere and sometimes, in the background if it’s near one of their great rivers, crowds of mourners throwing a dead loved one into the water, where it’s left to its own devices, drifting past other sites where crowds are bathing in the ‘holy’ river.

But travel a few hundred miles to the north, into the Himalayan foothills to see fabulous mountain scenery stretching as far as the eye can see, visions of rock, snow and ice, combined into a glorious whole by the sheer power of nature.

When my wife Jacqui and I sailed in the ‘Rangitoto’ to New Zealand, many years ago, we passed through an area of sea which was like an enormous floating island, an island made up entirely of the waste products of the human race; plastic bags, cardboard boxes, pieces of furniture, tree pruning’s and more, trapped by some prankish current in the middle of the Atlantic, as if Mother Earth was trying to tidy up OUR mess, because we are too selfish to do it ourselves – what an indictment on us! 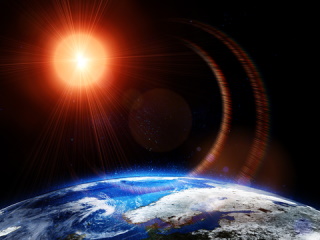 Sometimes, it seems to me that Earth is fighting a losing battle, there are just too many of us, the majority uncaring, for the planet as we know it, to survive.

But look back over the millennia of centuries past and there is a pattern to be found. The earth operates to a vast rhythm, like a metronome of good and bad. It was nearly wiped out in the time of the dinosaurs when a huge meteor struck the earth, wiping out most of those wonderful animals, the sky was permanently dark and most plant-life was exterminated as well.

But give the dear old Earth a couple of hundred thousand years, and all was well again, with new vegetation and a completely new breed of livestock coming on - the Mammals! Nature’s mistake here was to design us, when she worked out how all the others animals should look; I bet she’s regretted that one many times since.

And things like this, though perhaps not quite as dramatic, have been going on ever since, ice ages, earth quakes, volcanic eruptions, changing sea currents and weather patterns – all have played their part in trying to wipe out Mother Earth, with the tiny, but important attack on humans in the form of Covid19 being the latest, but somehow she still manages to keep carrying on.

So it’s because of this that I still have confidence that it will all be alright again soon, (in historic terms), we will be shown, or will work out, the way to defeat our latest enemy and all will be well again.

The old girl has a long way to travel yet, I only wish I could be here long enough to see what the next part of the story will be.