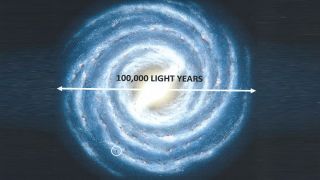 Yes, we may consider ourselves and the ball of rock we live on to be the most important things in the whole universe, but when you start to really think about it, that is ridiculous!

That’s what I believe anyway and there are several pieces of evidence that make me as certain as I can possibly be that this is so.

Let’s look just at our own galaxy, the Milky Way for instance, bearing in mind that there are literally millions, in not billions of other galaxies, just like ours, stretching off into what appears to be an infinite distance, way beyond our own! (You may find I shall be using quite a few exclamation marks from now on!).

The Milky Way is a comparatively unimportant galaxy in the general scale of things, but it’s our ‘home-town’, the family we live in/ with.

It’s what is called a spiral galaxy due to the ‘spinning’ arms it composes of and, (here’s the first mind boggler!), if you could lay a ruler across its diameter, you would need one, one-hundred-thousand light-years long to encompass it!

I can’t give you that size in kilometers because I haven’t a clue how to work it out with such large figures, but if you want to do the sum yourself, the speed of light is 300 thousand kilometers per second – all I know is, it’s a hell of a large number!

And our importance in this galaxy?

Well, Earth is a very minor planet, circling a very minor star, not far from the edge of a minor galaxy containing an estimated 100-thousand-million stars!

Yes, I said 100-thousand-million stars, though I doubt anyone has yet been able to get an actual, accurate count, but this is close enough for our purposes.

And just think for a moment about all those other millions of galaxies I’ve already mentioned above, some of them very much the same size as ours, some of them millions of times bigger than ours, each of them packed with stars just like ours, and you can begin to see why I think it extremely unlikely that, in all this ‘soup’ of billions of stars, there aren’t just one or two with planets circling around them, and a few of those planets having some kind of intelligent life forms on them.

That still gives us an un-countable number of possible planets on which people just like us, or beings totally unlike us, may be living and wondering if we exist too!

Of course, unless some radical new form of travel is somehow discovered in the distant future, there is absolutely no possible chance of we humans getting to their homes, or they to ours; even travelling at the speed of light, (supposed to be impossible!), it would take many years to get to the nearest star that looks likely to have an earth-type planet circling it, and in most cases several lifetimes!

If you look at the attached artist’s impression of what our Milky Way looks like, you may notice a small dot in the lower left quadrant with a white circle around it.

The black dot represents our solar system, though it would actually be invisible at this scale.

One hundred and twenty years ago, in 1897, a clever man named Marconi invented a system of sending messages through the air, over long distances, which came to be called ‘radio’.

He sent his first experimental messages in that year, some to other sites on land and some over sea, which is where at first his new invention was mainly used, by ships in distress, (the Titanic used this very system to broadcast its terrible message!).

The white circle, surrounding our solar system is approximately how far his very first messages will have travelled, moving at the speed of light, ever since 1897, (125 light years)!

The ever weakening radio signal should have reached our nearest star, Alpha Centauri some time ago, and although one of its planets, Proxima Centauri could it would seem, maintain life, at the much slower speeds we would have to travel at, it would take several lifetimes to get there!

So, it would seem we are destined, to be marooned here on Earth for a very long time yet, with the same problems applying to anyone coming here, even though I am as positive as I can be that there MUST BE life out there – we are just isolated from it at the moment, by the dictates of time and space!