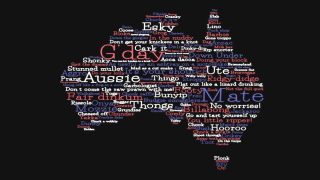 English must be such a confusing language for ‘LOTE’ speakers, right?? (LOTE=Language Other Than English!)

Years ago I lived & worked in Spain. While not ‘perfect’ my Spanish is still ok - 'después de una copa o tres de vino tinto!!! (esp. after a glass or three of ‘red wine!)

We say CHURCH, CHIMES & CHAINS emphasizing the ‘CH’ but then we have CHARISMA & CHARACTER plus let's not forget CHRISTMAS with more of a ‘K’ sound and CHARLATAN & CHANDELIER with a ‘SHH’ sound...

All those words above start with the letters ‘CH’.

Ok – how about CAR, CARPET & CARTOON compared with CAN, CAN’T & CARROT?
All those start with ‘CA’ but are pronounced differently!

So what about the letter ‘D’…

DANGER, DAGGER, DARE all have ‘Da’ in them but are pronounced differently as do DETONATE, DELIVER, DELVE, DERIDE, & DEBRIS!

As for DO & DON’T … why not pronounce the latter ‘DOONT’?

Apparently English is one of the hardest languages to learn – especially ‘Aussie’ English.

Meantime some fun... How many Ausie words do you REALLY know!?

Australian Slang Phrases And Words For Day To Day Life