So What's The Problem? 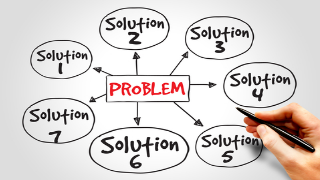 I had a problem!

I had been asked to write something about 'having a problem' and then solving it, but the problem was, I couldn’t think of a problem to solve! I racked my brains for a few days, while I was doing other jobs around the house, helping my wife Jacqui with the washing up, the vacuuming and the lawn mowing, but somehow nothing would come up to the surface of my mind.

I then tried searching for ideas in various books I have lying about the house, novels, reference books, art books, even dictionaries and, most desperate of all, magazines. You have to be pretty well at the end of your tether to look for good writing ideas in most magazines.

They usually offer you a load of junk, made up mainly of totally invented stories, pretending to be the truth, put together by literary amateurs, (like me!), out of words containing no more than two syllables. Needless to say, I didn’t tarry long in the magazine department, and even my other books didn’t offer much assistance to my tired old brain either!

My next source of information was the television. There had to be something there, I felt. All those channels, broadcasting ideas garnered from all over the world, surely I could get some sort of problem to solve from there. I even considered stealing a plot from Poirot or Cold Case.

But the trouble with television is that you can only watch one channel at a time and invariably I would watch something on, say, Channel Seven, then I would be asked by a friend next day if I had seen “That wonderful, thought provoking item on ABC last night. The program about the mysteries of ancient building skills, and the methods used by Egyptians to solve the problems of building the pyramids”.

While that was on I was most likely lost in the wonders of Neighbours, or Two and a Half Men, neither of which was designed to provide me with any intellectual sustenance!

So, I cast around for some other source of inspiration and of course the computer I happened to be sitting in front of at the time, suddenly presented itself as perhaps my last chance of finding a suitable subject for my essay. After all, I thought, you can find literally anything on the computer. All I had to do was put a few key words into Google and all would become clear.

First I tried “Problem”, which provided me with, (and this is the truth!), eight hundred and sixty one million answers!

The number one answer came from Wikipedia, which said: “A problem is an obstacle which makes it difficult to achieve a desired goal”. Well, duh! I already knew that didn’t I. That was why I was in there, searching.

The next answer told me that swimmer Nick D’Arcy had a drink problem. Very interesting I’m sure but not a lot of help in my quest. I gave it one more chance. This time I was told that “problem gambling” is when gambling causes personal harm. - How useful was that!!

In desperation I changed the search slightly to “Problem Solving”. Dear old Wikipedia once again came to my assistance, telling me that “problem solving was part of thinking”, closely followed by answer number two which declared “There are many approaches to problem solving, depending on the nature of the problem.” Now this was all very fascinating, but did little to solve my problem.

This was information I was well aware of without needing eight hundred and sixty one million ways of telling me!

For one final attempt, I entered “solve” into my Google search. But that only took me back to “Problem Solving” in Wikipedia, and numerous Companies with the name Solve, most of which seemed to deal with communications or computer software. No help there!

Now of course, I had a new and completely unexpected problem to add to the one I was trying to think of for the writing exercise! My new problem was that I couldn’t think of anything else to enter into my search engine to help me get a good idea.

So I just sat back, numb and dumbfounded, wondering what on earth I could do next, staring at the blue screen in front of me as if I thought, or hoped, something dynamic, exciting and useful might suddenly appear out of it completely of its own accord.

And in some weird sort of way I guess that is just about what happened, because after a moment or two of nothing, it came to me that I had just created a problem - and solved it without even realising it.

My problem had been, not knowing what to write as my problem! And I had solved it by writing about the ways I had tried to discover the problem. Writing down the various ways of trying to find the answer had in themselves provided the material for the written result I now have here in front of me.

Problem found, problem solved, just as I was asked. NO PROBLEM!...