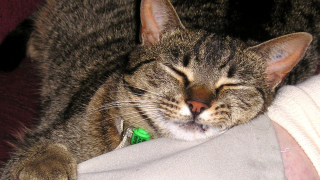 We once had a cat... well, we’ve quite a few cats during our sixty-two years together, but this particular one was rather special. His name was Roger and he was a cat that outlasted many of the others we have owned, surviving through several house moves, (something a lot of cats don’t take kindly to), and numerous adventures!

He was a cat that could open virtually any door that was blocking his right of way.

The only ones that ever defeated him were the round ones with no lever action for him to take advantage of, and he would vent his anger on them by scratching the door itself. We went on holiday one year and left him home alone, with a kindly neighbour coming over daily to feed him and check he was OK.

He had a cat door by which he could enter or leave the house as he wished, not having to wait for the neighbour to show up, but we wanted him to be able to go no further than the kitchen while we were away, in case he brought some mates in for a party and tore the place apart.

Knowing his capabilities with door handles, I closed the kitchen door before we left and then tied up the handle, on the other side, away from the kitchen, thinking that would defeat him!

We were totally Gobsmacked when we came back, ten days later, to find the kitchen door wide open, the rope I had used lying, looking very miserable, on the hallway floor, and the rest of the house looking as if a cat had lived there.

Our neighbour said she had noticed the kitchen door open a few days after our departure, but not knowing it had been tied shut she took it for granted all was as it should be. To this day we have never been able to figure out how he managed to get the other side of the door untied, but he certainly looked very complacent when he welcomed us back home again!

We lived on a new housing estate at the time and were surrounded by partly completed homes, being built since ours had been finished, and Roger delighted in going exploring these other houses, perhaps hoping there might be a few mice in there, or something.

All was well for several months, until one fateful day when he didn’t come home at mealtime as he usually did and we went searching for him, around the gutters of local roads, (in case he had met his fate under the wheels of a passing car), and amongst the various partly completed homes.

But we had no luck and after several days we decided he must have met his maker somewhere near home, but not where we could find him to give him a decent burial; so we got on with our lives.

About ten days after he disappeared, I was taking our golden retriever, Grotty for a walk around the housing estate and I was passing one particular house when I thought I heard a meowing sound. I went up to the house where the sound seemed to be coming from and sure enough it was there, so I called out, “Roger?” and immediately the crying noise became more frantic, coming from under the wooden floor of the house.

I ran out and found a builder, who came with me, stuck his claw hammer into one of the floor boards, heaved the plank up and out came Roger, dirty, thin, angry but somehow dignified. He immediately left me standing and rushed off to our home, where Jacqui said she heard him hollering at the kitchen door, wanting food!

I chatted to the builder who had rescued the cat and he told me the under-floor area has been sealed up, with a last few vent bricks being installed, ten days previously, so Roger had obviously been sealed up in that ’tomb’ ever since the first day he went missing; he had gone exploring under the floor of the house about half an hour before someone came along and bricked him in.

He had another, somewhat similar experience a few months later, when he got sealed in another house, but not under the floor I’m glad to say, so when I went searching for him again, this time concentrating on the buildings rather than the road, there he was, hollering at me from one room, demanding I should free him, (again!).

This time I didn’t bother to find a professional, I carefully removed the putty round a newly installed window, climbed in a retrieved our wayward cat, climbed back out again and replaced the window, using the original putty!

He was a great cat, a real character and someone I could go on writing about for some time to come. Sadly he died at the age of about twelve, not long before we were coming to Australia.

We had thought that we might, despite the cost, bring him with us, but I suppose it was just as well really, as the vet said there was every likelihood he wouldn’t have survived the trip anyway at his age.

We will always have fond memories of Roger though, he really was a great cat and a worthy member of the Lee family!