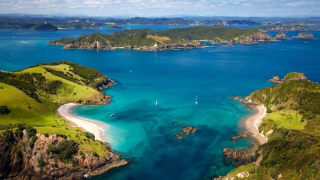 Milk in a churn, life on a cliff, baby in a suitcase, and the dunny with a view.

When people travel to Russell in the Bay of Islands now, they do it in comfort by car, bus, or luxury coach.   We travelled on a rattling old train, with our baby daughter in a canvas bassinet. It was December 1960.  We had settled in Auckland about 243km/s from Russell.  We were going for our first holiday since arriving in New Zealand, to the Bay of Islands.

Picked up at the ferry; we were met that afternoon by our friend Bob.  He owned a quarry and lived in a house perched high on a cliff above the bay. Bob and his wife had invited us for a short holiday, a break by the beach. We were more than willing.

The breathtaking beauty of the place still returns when I recall that holiday. To me that small shack, with modest lounge and a couple of spare bedrooms was paradise. I left a little piece of me there.

We got to know the quiet township, the delightful drunken doctor, and the fishermen around the area. Kerry our daughter was six months old, that night she slept in a suitcase with the lid propped up and well padded. Luckily we had a very placid baby, and the cot arrived next day for her.

The house was perched on the edge of a cliff, and it took some stamina to climb the path. But we were young then, Brian was 25 I was 21.  I was enchanted by the fact that milk was delivered at the bottom of the cliff in a churn.

It arrived well before dawn because of the heat, and about a third of the contents consisted of pure cream. 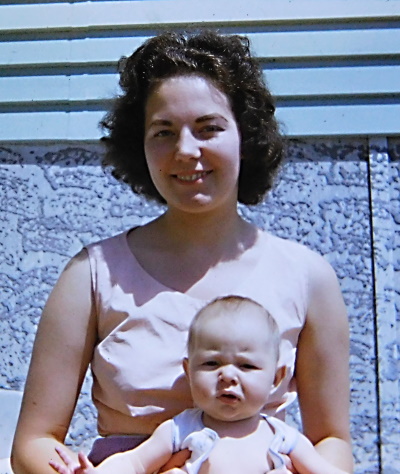 who had been fed by me until then went onto feeds of real milk.

I diluted it and boiled it of course, and she grew healthier day by day... Her baths were frequent dips in the warm blue waters, and we watched as she showed how happy she was. She has never lost her love of the Ocean; I think that was started by her dips in the Pacific.

Russell has a colourful history, a place where seamen and traders and convicts first lived. It was a rough place but soon became more elegant with beautiful buildings and hotels springing up.

The history is still apparent. The buildings are well preserved. There are wonderful cruises to see the islands, and stunning bush walks to explore. The markets now are busy, and there are restaurants for all tastes. Not quite like when we arrived, the journey to Paihia on the bus was quite an experience I ventured on it alone as my husband was in hospital for a day or so.

The mostly island passengers had a guitar and sang all the way on the journey.

That fabulous haunting sound of their music can still make me cry when I hear it.  The sweetest sound as I was lulled almost to sleep on those bus trips.

My husband Brian helped to concrete a tennis court with Bob, and they also went out delivering water in a truck. I stayed home with Pat and the boys and walked on the beach. A huge mountain of a guy called Hari did odd jobs for them.

One day he was moving the portable toilet cubicle. A rather primitive box, which was just placed over a new hole every now and then. He was a little the worse for wear this day and his stumbling feet made him fall. It was a disaster in many ways but did at least provide a nice window in the side of the fibro hut.  His bull like head had gone through the wall.

We now had a wonderful view of the ocean as we used the dunny.

Our entertainment was silly parlour games and BBQ’s; life was very simple in those days. TV had not even begun to appear in Auckland, well not for general use, and it was even less apparent in Russell.

If only I could, I’d revisit Russell one more time.

For any traveller in NZ I would suggest you go North next time go and see this beautiful part of the country, and send me a photo, just don’t play me any Maori music though or I will be in floods of tears at the memories it evokes.

ABOUT THIS LOCATION: Thanks to Wikipedia

Russell, known as Kororareka in the early 19th century, was the first permanent European settlement and seaport in New Zealand. It is situated in the Bay of Islands, in the far north of the North Island