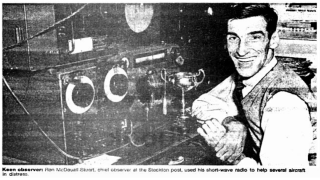 I started working in radio on my 15th birthday, and over the years I’ve also worked in TV and music recording studios here, in the UK, Spain & USA.

And yes, I have some very strong memories (and stories!) of all of them, but the strongest memory I have of just about anyone I’ve ever had the pleasure of meeting & working with was a man called Ron Stuart… who also went by the handle of VK2ASJ.

Now I can almost guarantee most people reading this will have never heard of Ron or what his ‘handle’ actually means.

Ron is the great-great grandson of John McDouall Stuart, one of the most accomplished and earliest of all Australia's inland explorers.

He lived in the street behind us in Stockton, a sleepy suburb of Newcastle NSW where I was born and raised. So what was so ‘special’ about Ron Stewart?

Well he could hardly speak for one. He was born with a severe case of Parkinson’s Disease. But that didn’t stop him doing some of the things he loved!

I was about 12 or 13 when I started noticing Ron. He used to love riding his push-bike up the street to watch the bowls – which just happened to be across the road where I lived. I also had a bike at the time and eventually started talking to him about his.

It was then I realised how ‘handicapped’ he was with his words slurring and stuttering.

But that only made me more interested in him because he was so ‘unusual’. We managed to talk about a few things, and he asked me what hobbies I had.

I mentioned dad had recently bought me a second hand short-wave radio and I loved listening to stations a long way away especially if they were in another language!

One day Ron was out with his mother on a short daily walk. He had obviously told her about me, and my hobby and she said “Ron wants to know if you’d like to pop around one morning to see his radio setup”

Well… He hadn’t quite explained his ‘radio set-up’ but when I arrived…. There it was!

A HUGE antennae in the back yard mounted on a platform. Lots of fancy (to me) dials and speakers and gadgets in his radio room and a big pedal on the floor… whatever that was for!

During the war he was involved as a ‘coast-watcher’ monitoring the airwaves and relaying messages to our navy as required about enemy activities.

But how does someone who can hardly speak do that? – Morse Code of course!

Ron’s talent with Morse Code was very rare as he was known for being able to listen to the fastest code being output and not miss a beat. But he was unable to reply or relay anything by hand using a code-key. So a good friend built him a foot-based one.

Yep that big pedal on the floor was Ron’s ‘morse-code’ key!

Not the fastest option, but at least it enabled him to do what he loved… communicating - even though the odds were against him from birth.

I was absolutely in awe of what he was capable of doing and I probably learnt more about people with disabilities and what they are capable of from Ron than anyone ever since!

Then after several visits, given my interest in radio generally, Ron asked if I’d like to ‘have a go’ myself as Jack was not able to join him as often as he needed to go into hospital for ‘awhile’.

For some reason I wasn’t ‘nervous’ – probably because I was already in the local school debating team and used to speaking publicly.

So what makes Ron so ‘amazing’… a ‘Superstar’ as I noted in the heading?

Well to keep himself busy, Ron was also the local church ‘newsletter editor’.
Yep – he would type up each month’s newsletter which was then photo-copied and distributed to church-goers.

Apart from his amazing ability at  overcoming his  ‘disabilities’ I also took home some important ‘life-lessons’ from Ron.

Respect for others was one of them. Don’t judge or mock someone’s ability or intelligence based on a physical disability.

And never give up… If something doesn’t work the way you expect or want it to or you can't do something the same way everyone else does... Try something else. Give it another go!

Sadly the kids at school eventually found out I was seeing Ron and doing the ‘radio thing’. Many of them mocked me mercilessly saying things like “spasso lover” … and worse.

But I just ignored them because to me, Ron was my ‘best mate’ even though at the time  he was almost old enough to be my dad!

Best of all though, Ron helped me – directly or indirectly – get me my first job in radio.

His brother was in fact a technician at radio 2NX Newcastle – a local commercial station. I was approaching my 15th birthday and looking to get out of school because by then – like most teenagers I ‘knew everything’ right??

Dad, a chartered accountant who had to leave school at 14 to help the family business said – “get a job or stay at school”.

To his dismay (well probably delight as it turns out) I did!

The rest is ‘history’ as they say…. I went on to bigger and better things over the years in media generally here and elsewhere – including as I mentioned earlier – working with some pretty awesome ‘stars’.

But none will ever top my very first real ‘super-star’... Ron McD Stuart.

About John McDouall Stuart
John McDouall Stuart, often referred to as simply "McDouall Stuart", was a Scottish explorer and one of the most accomplished of all Australia's inland explorers. Stuart led the first successful expedition to traverse the Australian mainland from south to north and return, through the centre of the continent.Wikipedia