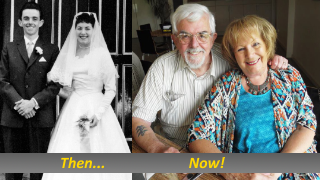 Words very carefully arrived at by someone a long time ago as the basic rules for a happy marriage, and how true they have proved to be, especially as we all get older and need to rely more on our partner,

if one or both are failing, either physically or mentally. And this caring attitude isn’t something that we can simply call on at the age of seventy; it’s something that has to be nurtured during the whole marriage. Forgetting sex for a while, it is love that carries the load during those all important early years, and it is mutual love that that brings those five little words into action!

Jacqui and I have never been very wealthy, especially during the first few years of marriage, like most other young couples, we worked hard at getting the most we could out of the life we were living. I’ve always enjoyed creating surprises for her, some quite small, some bigger, like the weekend I took her to Paris to celebrate our Silver Wedding.

We had a wonderful time, spending money we could ill afford, going to famous places we had only read about and eating in genuine French restaurants. The whole of Paris is like one enormous art gallery, with statues and wonderful architecture virtually everywhere, and all the women seem to be fashion models, they are so elegant!

On another occasion, I took Jacqui for a flight in a balloon, as much for my pleasure as hers, and we flew from Bath to Frome, a distance of about thirty miles, followed by a lovely meal in the pub near where we landed, accompanied by the  pilot. A great experience!

For her part, Jacqui has looked after my every need for the sixty two years we have been married.

She is a wonderful cook who often amazes me with exotic dishes; my clothes are always beautifully clean, as is the house, and she made a superb job of bringing up our three lovely children, now all in their fifties and successful in their various fields.

Now, in retirement, we still look after each other, both of us fortunately in reasonable health, apart from the usual signs of getting old! We’re financially back in much the state we were when we first got married and have to take life a little more easily now than we could when we were in our prime, but we still enjoy ourselves – we simply aim a bit lower!

And we both have our painting and our writing to occupy us, both worthwhile occupations I believe, helping to keep the old grey matter working properly, even while our vision and steady hands do fail us a little now and then.

No doubt the time will come, all too soon, when one of us will no longer be able to function adequately, but I am confident that whichever of us it is, the one will fulfill the responsibility of looking after the other. We hope that this day is still a long way ahead of us and after such a long and happy marriage we both know each other to the extent that we can often plan things together without even talking together, something I would never have believed possible when we were first married.

I will suddenly think of some idea, something I think Jacqui might like to do on the next day for instance, and just as I am about to ask her if she’d like to go to Lakes Entrance or somewhere, she’ll look over at me and say, “It looks like being a nice day tomorrow – why don’t we go over to Lakes Entrance for the day; might be our last chance before winter”!

I’ve talked to other older couples, like us, and I was surprised to find that many of them can pull the same trick too, so it’s pretty obvious that it’s normal for two people who have lived close for a long time, which is rather nice isn’t it.

The most important thing I have learnt, in the sixty two years, is that like almost anything else worthwhile in this world, a marriage has to be worked at in order to succeed! All too often these days, young couples come up against some small barrier to their continuing happiness and give up, instead of fighting for the continuance of their promises regarding honour, sickness, health, and wealth!