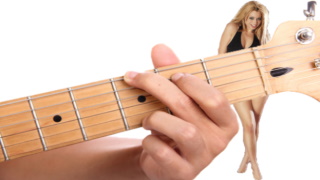 My wife of 30+years, Kaye sure does! Particularly as 10 years prior when we first started going out together, I was showing her how to play guitar.

Ok – I’m not a professional but I do know enough about music to explain the strings on a guitar. E-A-D-G-B-E… So you might be saying… “what’s the big deal?”

Well part of my ‘tutoring’ at the time involved helping her how to hold the guitar itself.

You know… my left arm around her left shoulder positioning the left hand. Then my right hand around the front to show the ‘strumming action’.

Ok – so now you have an idea of what was going on. Can you relate to something similar? Let’s face it – we were young and ‘getting to know each other!’

“No… put your finger on the G-string” I’d say, trying to show her a sequence of notes…

More giggles… “Why are you laughing?” I’d say!

Believe it or not it was only a few years later that I actually learnt what a ‘G-String’ was.
Not the guitar type… the OTHER type!

Well it seems the G String is not quite as new as first thought. As far back as 75,000 years (mostly) men wore something very similar – basically a loincloth.

Fast forward to the 1939 World’s Fair in New York.
Traditionally as part of the entertainment, there were strippers who basically ‘took it all off!’

Apparently, the NYC mayor at the time was worried international tourists might be offended by this and changed the laws about public ‘nudity’ so all the girls got together and came up with a solution: a tiny strip of cloth to cover up just the girly bits but still able to show off everything else without technically disobeying the new laws.

Then in the late 70’s early 80’s  this simple ‘strippers undies’ started being marketed as a ‘thong’… and the rest is history as they say!

Besides, ‘blokes’ have been wearing a similar thing called a ‘jock-strap’ for pretty much the same time.

No doubt you remember that comedian Borat of course with the very exotic ‘mankini’, but even Russell Crowe wore one as part of a costume for his 2005 film ‘Cinderella Man’.

So now you know as much as me – Two ‘G-strings’ both with very different purposes.

A cheeky question I know but… ‘which one do you prefer’?