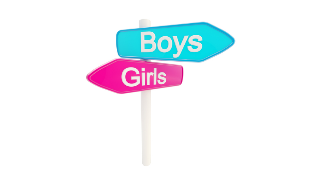 Increasingly, various primary schools around the country seem to have been coerced into taking the extraordinary step of introducing gender-neutral policies.

This means no more boys and girls – just children. No more Mr or Mrs, Sir or Miss. It also means teaching children that boys (sorry, had to use that word!) have as much right to play with dolls as non-boys (previously known as girls). In some cases unisex toilets have been introduced in schools for children who don’t feel comfortable using a bathroom allocated to a particular sex.

When I was growing up, and despite being a ‘real boy’ (sorry 1950s speak!) no one forced me to play with trucks or trains, although I did, and yes I even had a doll – a Golliwog as it happens!

Sorry, I used the ‘G’ word! But that was what my doll was called. The best thing about it was it introduced me to the normality of different skin colours.

One of my best friends at primary school in Stockton (a suburb of Newcastle, New South Wales) was Indigenous. His dad was the famous boxer Dave Sands (Ritchie) who sadly was killed in a truck accident in 1952, about the same year his son was born, and I don’t remember ever thinking twice about the colour of his skin.

Mum, dad and myself moved to Papua New Guinea in about 1970. At the time PNG was under the political umbrella of Australia – it became an independent nation in September 1975. But what it immediately taught me was what it’s like being a foreigner in someone else’s home country.

It was also a reminder that black, white or something else, we are all the same. At least my Indigenous friend at school helped me understand that idea in the early days!

Since then I’ve been fortunate to have travelled, lived and worked in several countries including the UK, USA and Spain. Yes, I was a dinky-di gringo until I learnt to be reasonably fluent in Spanish for my job as a recording engineer in Madrid.

So to be called an Aussie or in my wife’s case a Kiwi is no big deal.

But why do some UK people resent being called Poms or Pommies? And likewise some Americans hate the term Yanks yet they will call South Americans Spics short for Hispanics or Latinos in general.

But what is encouraging is the development of language in a positive rather than negative way.

I have male and female gay friends who are legally married.

They refer to their other half as “my husband” or “my wife” rather than just “my partner”. In fact about a year ago I attended my very first same sex marriage. Two males. The celebrant also mentioned she was gay.

Best of all is that they are all very happy and supportive of each other. They are also very tolerant of people who don’t ‘get’ same sex marriage.

My whole point to this story is that there are so many people concerned over the words that describe us all, but in the end we are all the same.

Sure we have different ethnic origins. Maybe different sexual preferences but we are all human.

To try and placate a very small minority with gender-neutral titles, or to eliminate words that have been part of our language for decades tells me we are dealing with serious social issues.

And that is something that won’t be easily fixed by renaming ourselves.