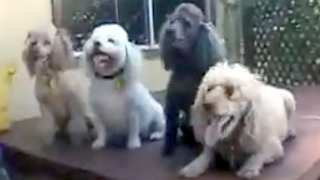 "You've got HOW MANY dogs" !!??  was a question often asked by people when we started talking about pets.

But to be honest having four dogs was really no more difficult than having one... with one exception, Chica, a now 17yr old 'rescue' Toy Poodle we've had for about 8 years at the time of writing. In fact we like to tell people she's more trouble than the other four put together!

More on her in another post soon. So how did we end up with four dogs?

Well long story short, it all started back in Spain. I was working over there for the BBC on a TV soapie. We had a lovely 'Villa' right on the Mediterranean sea - in fact the house was called 'Villa Kayam'. The hours on location were long and although Kaye was doing a bit of part-time work along with Spanish lessons, an opportunity came up  to 'rescue' a small dog so we thought 'OK... good company for her and when the show finishes we can take him back to AU'. 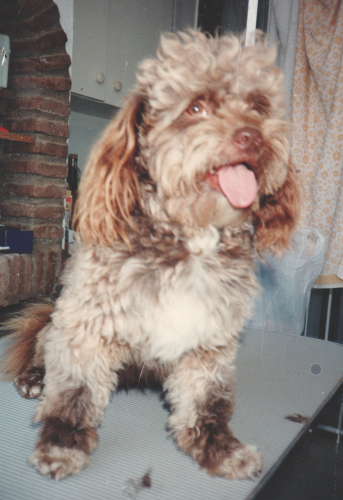 We named him 'Picasso' (of course) and he was an absolute delight and fitted right in to our lifestyle and location.

Sadly we didn't have him for more than about 6 months. After a much needed bath he was running around in the front yard adjacent to the beach like he always did. But this time he disappeared without his collar & ID tag. We found out later some local 'gypsies' had taken him but only to the other side of the main road outside the house. After alerting the local radio stations (both English & Spanish) we received a call advising they thought they'd seen our boy trying to cross the road near our house.

We went out with great expectations but were devastated to discover he'd been run over and killed. We buried him under a tree at the house in the hope we can one day re-visit the place and remember him. 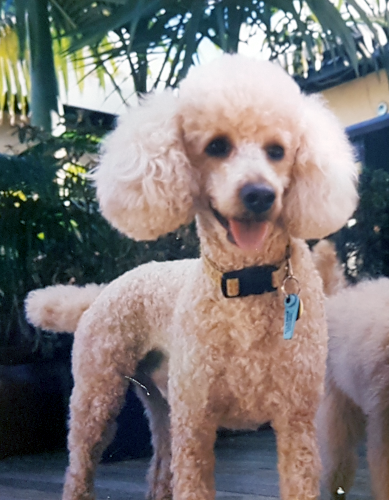 So after returning to Australia about a year later, and finally getting ourselves a house in Sydney close to work, we realised we actually missed having a dog. So after lots of research we found a well known and respected breeder of Miniature Apricot Poodles. More research and several visits later we welcome a gorgeous young puppy 'Cosmo' into our lives. Kaye named him Cosmo after the amazing stars in the 'Cosmos' that very first night as we drove home from the breeders with him.

But while Cosmo enjoyed our company and we enjoyed his, it wasn't long before we felt he might be even happier with a 'friend' ... 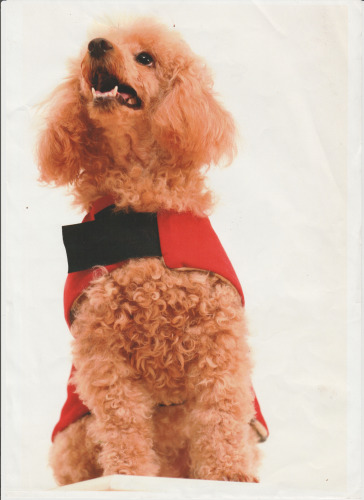 Enter 'Kismet' !... (meaning 'fate or destiny') another gorgeous pure bred Apricot Mini Poodle. She was a bit smaller than Cosmo but as they grew together you can guess who became 'pack leader'!!

Meantime, part of our 'passion' at the time was animals and we got involved with the AWL or Animal Welfare League NSW. Somehow we ended up fostering the occasional dog, but like most 'foster carers' we succumbed to the delights of a black Mini Poodle we called 'Monet'. (I wanted to keep the Spanish theme going in memory of Picasso!!).

But oh boy... Monet was smart. If the doorbell rang all the others would run to the door barking and jumping up.. Monet would casually walk out the back door and look through the hallway to the front door.

We assumed he was doing 'rear guard duty' 'just in case'!!

Anyway another 'foster failure'. Matisse (see, there's that Spanish theme again!) - We were looking for a different breed and some research had got us interested in a Bichon Frise. Well after finding this young pup in a cage at the shelter mixed in with an entirely different breed of dog, we instantly fell in love with him.

The other three dogs all seemed to welcome Matisse or 'Tisse' as we called him. He was our 'baby' in many ways and loved attention. He also loved food too as you will see in any photos of him!

So that was the '4-Pack' as they were referred to by friends over the 18 or so years we had them as part of the family.

Of course there are many MANY stories - some funny, some not so funny - about each one I hope to share with you in due course including how we managed to cope with them all in an old 16ft caravan we took away for the odd holiday!

But the best thing of all are the memories. We're currently travelling full-time with little Chica in a much larger more modern van and we have photos of each one of them up on the walls of the van. It's a great way of remembering them and we often say 'hi' and smile at them.

Sadly our pets don't live as long as we'd like them to so just enjoy EVERY moment with them. In fact we've even learnt from them the best way to live. That's a day at a time!...

Enjoy EVERY day. Forget the past as best you can (unless it's happy memories) - Have a growl if you must then just wag your tail and move on. That's what dogs do...