Ocean Travel - A World Within A World! - Brian Lee 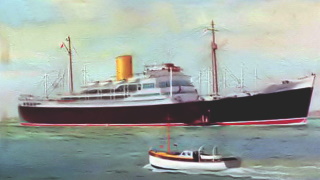 Jacqui and I were married in 1959, and within three months of the wedding we boarded the RMS ‘Rangitoto’, at Prince Albert Dock in London, headed for a new life in New Zealand.

Neither of us had had a greater sea voyage than the ferry from Southampton to the Channel Islands before, so we were pretty excited as we stepped onto the gangplank that eventful day, leading to what was to be our home for the next five weeks.

The ‘Rangitoto’ wasn’t a giant vessel, like the ‘Oriana’ and many other cruise ships, but she was a fair-sized ship, and certainly, as we stood on the dock and gazed up at her, she looked pretty enormous to us.

We entered the ship through a large doorway in her side and were immediately led over to a desk where someone was waiting to check our credentials and tell us which cabin we were allocated to.

Not that I heard much of what he said, everything was much too interesting and exciting to worry about minor details like that!

We had a very nice cabin right up on the main deck, with a large porthole to look out through, twin beds, a dressing table, a dining table and several easy chairs, more like a hotel room than my imagination had led me to believe from reading books.

There was much too much going on around the ship at the moment, as preparations for departure were completed, so we dumped the small amount of hand-luggage we were carrying into our cabin and found our way out onto the main deck, to join in the fun.

The first thing that struck me as we leant over the rail of the deck, was the terrific height we were above the ground, like being on the fourth or fifth floor of a building, which I suppose that is just about where we were anyway.

The next thing that struck me was the very large crowd of well-wishers and families, standing on the dock below us, all peering up at the ship, some anxiously, some happily and a good few tearfully, with many of them clasping streamers of coloured paper, still connecting them to the loved ones above them.

This was an especially emotional moment, as the ship eventually moved, oh, so slowly away from the dock, and the various streamers started to break, completing that final separation between ship and shore.

It was because I had guessed, before we left Bristol, that this was going to be such a strongly charged time, and I had insisted that our parents and the few friends who came to say goodbye, should have it all happen at Temple-Meads Station, rather than them dragging themselves all the way up to London with us, and then have to endure that long, agonizing departure, whereas at the station it was quick and painless!

Once we were clear of the dock, and we could see people starting to disperse, back to wherever they had come from, Jacqui and I went for an ‘explore’ around the ship. 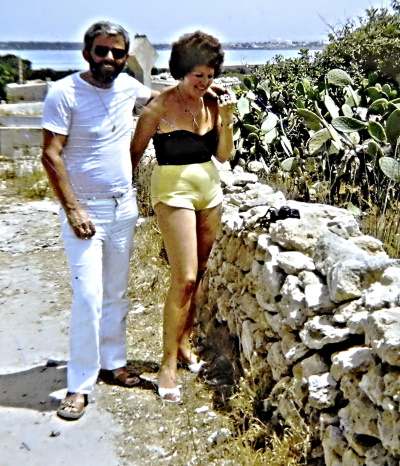 She was what is called a ‘one-class’ vessel, which meant that there were no first, second or third class sections, we were all, ostensibly, the same, though it did become obvious as time went on that even here they did manage some class distinction, with such things as first and second sittings for dinner, and ‘better’ people being cabined higher up, above the decks and with windows instead of portholes, but none of that bothered us, we were going to enjoy the voyage whatever the class was!

As a measure of our ignorance of major ocean travel, Jacqui and I spent the first couple of days of the voyage, sitting in deckchairs on the main deck watching England and the White Cliffs of Dover go past for the first day, and the sea going past on the second day, just as if we were (again), on the ferry to the Channel Islands. It was the third day before we got bored with the sea and decided to go inside to see if there was anything going on inside, our ‘explore’ of the first day had been too much of a haze to really remember what we found then.

What we did find rather stunned us!

There were bars all over the place with very cheap drinks on offer, there was a cinema, a ballroom, two cafes, deck sports and games, card schools and there was a shop, selling all sorts of rather expensive items, like perfumes, cameras, English candy and smart casual clothing.

All in all, as we quickly discovered, this ship, (like most others I guess), was a world within a world; being isolated, far from any help, these vessels had to carry everything that might be needed, for pleasure, utility or emergency, with most of it high quality!

Luckily, Jacqui and I are pretty quick learners and we very quickly got involved in the many activities on offer, got to make a lot of new friends and got to really enjoying ourselves for the next thirty-two days.

It was a wonderful experience that we have always remembered with affection, and one I would have loved to do again - which we did, five years later, as much more experienced travelers… but that is another story!