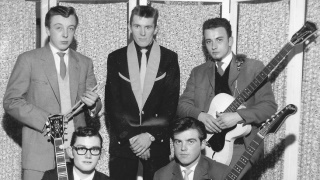 My brother Paul, was a Tony Curtis “look alike” he had the dark curly hair and the eyes framed by long curly lashes.  He played in a band with a few friends and they went to draughty church halls, small clubs and bars sticky with spilled beer.

They played well enough to have swooning girls ready willing and able to adore them, and be their close friends. My brother found that a pleasant side effect of his guitar playing.

I had gone to New Zealand, so only heard now and then what they were doing, when one day a photo of them looking very trendy arrived, with them wearing Italian suits and good haircuts as was the style. I began to think he might make it in the music business.

I went on happily in my motherhood bliss, and wasn’t aware of how earth shatteringly close fame and fortune came to those Bristol boys. If only they had hung in there!

When I returned to England in 1963. It was a rather eventful time. A day or so after we arrived John Kennedy was killed. That moment of history is emblazoned on my memory…

I was about to have our third child, and we had no home, not much money and no hospital was happy to give me a bed to give birth.

Beds were in short supply! 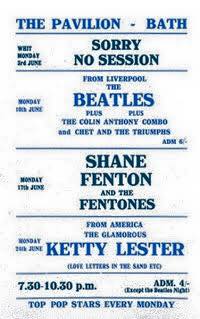 I must have been in the middle of a baby boom… such dire times.   We needed a boost of some good news. That bit of news was my brother and a special booking. With a band just making a name for itself.

There was a glimmer of hope, for my brother and his group. Their band, ‘Chet and the Triumphs’ were on the same bill as the Beatles,  where they had played at the Colston Hall in Bristol in June!

WOW indeed...  I didn’t see them. The timing was wrong, which was sad. After that I was always hoping they would get more bookings.

We were so dismayed, this didn’t make them a household name. OK so the band went on playing a few years after that concert. His mates were still playing several years later when we went to dances in a small village they often turned up to rock the place.

Of course what happened for the Beatles is a wonderful triumph for them.

My brother by then had decided cars were more fun. Also he was very popular with the ladies, so he drifted away from the music scene; Then went to Germany and enjoyed a lot of female company.  Paul   was working in the building trade, and never followed his musical career.   His life took many twists and turns, some not good.

Sadly he died in Charters Towers far too young.  I wish we had encouraged him more but still, he had his brush with fame even though that ‘glory moment’ was very brief.