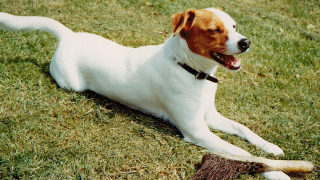 The dog we had when our children were small was called Grotty. Then after fifteen years of being part of our family he was gone. Kidney disease took him, and we were devastated.

Grotty had been the perfect family dog. A big Labrador Retriever always with a smiling face it seemed. We cried a lot often at odd times, as our home was full of memories of him.

The corners he had filled, and spaces left in our hearts were all empty.

I suppose the tears had to stop sometime. So, we just comforted each other and carried on. Life resumed but none of us felt any joy in it.

A week or so after we lost him, I was doing a market stall with a friend in an underground car park. It was a slow day, and I had almost decided to pack up the stock and go home.

An older lady was looking at china and glass, in her arms was a scrap of a puppy, it was a Jack Russell, with a cute patch over one eye.

Instinctively I reached out to it, and my friend Pat came over and made sympathetic sounds too.

The woman looked back with red rimmed eyes, “I have to take her to the shelter today, they won’t let me keep her in the flat”.

In unison my friend and I said, “NOO… you can’t do that!”

“Look... one of us will take her or find a home” we agreed. I said I would take her first and see if we could keep her.

Packing up that day I had some extra baggage. She chewed my skirt on the way home and then fell asleep, with her small paw on my lap.

The family came home about five, and I was nervous, as we had all said ‘no more dogs’. Well, some of us had!

The puppy had left puddles all over the house and was now chewing a shoe.

They moved closer to see her looking a bit unsure. “No mum, it’s too soon.”

“Not sure I want a dog yet” said my husband. 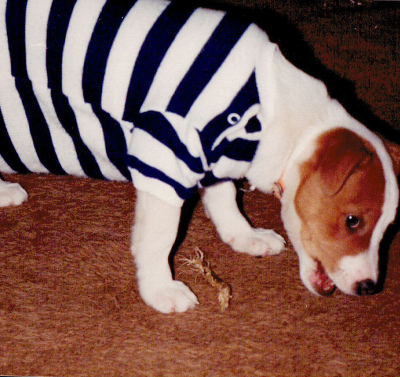 Then just as he spoke, without prompting, the puppy knew what she had to do. Making a bee line for my husband she did the full act.

She licked and kissed him, she writhed with love and pleasure, prancing in front of him. Coquettish and charming, fetching a shoe for him, and then her newly acquired ball.

She won of course!

Mindy, as we called her, became our new family member. She had us all besotted within a day.

She wickedly chewed up toilet rolls and wallpaper and chased squirrels in the park. But as she grew, she showed us just how bright she really was.

Most memorable though was her capacity to learn new words, and new tricks.

Before long we had to spell “Park” and “Walk”, and then she knew as soon as the first letter was uttered and went crazy with delight. She learned to fetch her lead and was waiting at the door in a flash.

When it rained, I dried her with a small towel I kept in the laundry, she loved being dried, and even fetched the towel herself if she was wet.

I came home from work soaked by a storm one day, and before I sat down, she had fetched the towel for me. Now THAT took intelligence, to react to me being wet!

Using rewards, I trained her to do what all toddlers should do. She had a mass of toys scattered around the house but I had a basket I wanted them stored in.

After a week of encouragement, I had her returning her toys to the basket on command, with treats of course!

“Put your toys away” I would ask, and within minutes she did just that, each chewed ball and squeaky toy returned.

On the flip side she could be very wicked and once chewed a roll of wallpaper destroying the expensive wall covering.

After the vandalized wallpaper, and running away with some good shoes, she had the dog equivalent of the ‘naughty corner’ for her bad behavior. She escaped under the bed with her tail ticking to show she was sorry.

Mindy left a bright shiny memory for us. Things she did, we remember with affection and smiles.

In every way Mindy was a joy, she filled a void in our lives, and left an even bigger one when she left us.