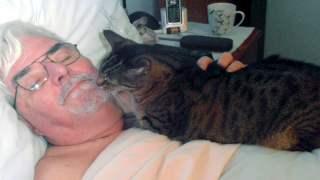 I’m the shady side of 80, but still functioning and firing on all cylinders.  I love the company of men. Well… sometimes I do.

When we meet up for coffee it’s often two women and 6 or more men, I like that. In casual coffee mornings, or meal situations, the men have strong opinions and we have a lot of laughs. We get on, although we may not always agree.

But men and beds! Now that can be a divisive element. That might provoke World War Three.

I am not alluding to ‘amorous adventures’, I have no complaints in my long life, am happy with my partner, we are totally content, perhaps more sedate now though.

But what is it about the destructive force of a male when he sleeps?  Sons, friends who stay overnight, husband, all of them have the same power to totally destroy the bed. Sheets are twisted and strangled, pillows on the floor, the covers all falling off the end of the bed.  Why does this happen? 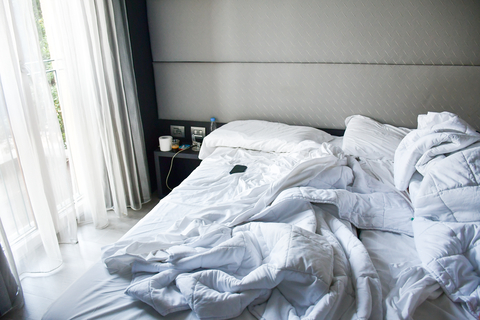 If I dare to mention it I am told, “you pulled the bedding out.”

Hmm... have done a study of this. When I had my new knee and was hobbling around the first week or so, I slept in the spare bed as getting up often at night was disruptive for my husband. I also slept alone when I had serious influenza and a broken rib.

Both times my bed was as virginal as when I crawled into it. Bedding intact, pillows gently squashed but still on the bed. The quilt would be still covering me, as were the two cats who joined me. I do not fight with the bedding, whereas my son and my husband do, they kick the sides out, pull the top sheet off, take nearly all of the quilt, or blankets, and when I come to tidy it in the morning it is a serious re-make job!

But I will never kick my mate out, we have slept together for 62 years so I think in spite of his dubious bedtime behavior, I would  still prefer to have him by my side.

But I am subjected to another night time hazard; that is his vivid dreams.

I have woken to being pushed over the edge of the bed!! As he tells me he us saving me from a large truck bearing down on us… or another time to him boxing with me due to being in  a dangerous situation. Then there was the “Can’t you see them?” problem, as he sat bolt upright and pointed to something at the end of the bed.

He said there were milk bottles lined up there! I get used to it, as I was the night he walked into the wardrobe…and shut the door. He had been drinking full strength Guinness though.

So as I remake beds many times in the week, I still count my blessings, I suppose I need him to save me from trucks in the bedroom, but I do need him if a large spider is on the ceiling, then he is very welcome.