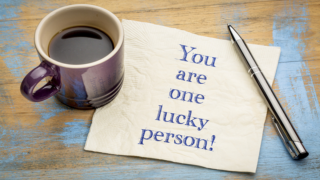 I’ve had a lucky life!

There have been ups and there have been downs of course, what life hasn’t gone through those periods, but generally everything turned out for the best, as far as I’m concerned.

Right from the moment of my birth I was lucky; I was born into a country that was civilised, rich and well governed, unlike many poor individuals who arrived where none of those advantages existed.

I was born to caring parents, who looked after my welfare right up to the time when I branched out on my own, many years later.

I was born in 1935, just four short years before the Second World War broke out, but even there I was lucky in that we lived in a part of Bristol which escaped most of the horrors of those years – the nearest bomb to us landed a good half mile away!

After the war I was lucky enough to win a scholarship to Fairfield Grammar School, and a few years later another one to the West of England College of Art, followed by an apprenticeship with a large printing company in Bristol, all designed to provide me with sufficient skills to make a good living in the profession of graphic designer I had chosen.

My next bit of good luck came in the form of a girl!

I used to drink with friends on Friday evenings, two of them being Bert and Elsie Sage, and one evening they brought their daughter along, having picked her up from her job as a trainee nurse.

Within six months we were married! We always tell people we HAD to get married quickly, and then say no more, which is fun. The real reason was the fact that I was lucky enough to be asked by the owner of the company I worked for to go to New Zealand to start a studio in a new company they had just bought there.

Our trip out was our, (fully paid for by the company), honeymoon on the good ship Rangitoto.

We spent a very happy, if frugal, five years there before it became necessary for us to return permanently to England for personal family reasons. We hated it at first, being back in cold, damp Bristol, but we, with our three kids, made the best of it and it wasn’t too long before I was able to start my own business, in Bath, where luckily, I gathered a few very big customers around me and we really started to enjoy ourselves again.

I made good money, we could eat out at restaurants as often as we liked, took holidays in Spain, the Lake District and Wales, and generally looked after Jacqui’s parents and my Mum, all of whom needed a little help by that time.

Eighteen years later, after my Mum and Jacqui’s Dad had died, we decided we wanted to get back to where our hearts really needed to be and we packed up everything, sold the house, and set off for Australia. (Not New Zealand this time; two of our kids already lived in Melbourne and we decided to go where they were).

We arrived a few days later, with no accommodation arranged, no jobs sorted, just the desire to be back in the southern hemisphere, with the money I had earned from my business in Bath!

Again, we were lucky; we both had jobs within just over a week of arriving, and we also found a home to rent at the same time as well.

So life was good again, the climate was good, (after the UK), the people were good, as most Aussies are, and our personal requirements had been sorted in double quick time!

We’ve now lived in Australia for thirty-five years and have no regrets at having come back here. Australia is a thoroughly modern, clean and happy country, the people display a delightful disregard for authority, and they are always friendly.

All the family, our boys living here in Australia, our daughter still living in the UK because of her husband’s commitments, (though we chat to her every week on Facetime, so it’s almost like having her here as well), plus our three grandchildren and single great-grandchild, have maintained good health apart from the usual mild problems like flu, Covid and a burst appendix that came very close to killing me, according to the surgeon who cleaned me up – what more could we ask for?

We’ll never be rich I’m sure, but that is of no importance whatsoever; we live in a tiny village of two thousand souls deep in darkest Gippsland (VIC), we have a large group of friends, the car is still functioning as well as can be expected, (just like me!), and all our bills are paid, up to date!

Yes, I consider myself to have been exceptionally lucky in my life, and to cap it all, my brain still functions, (I think!), I can still write rubbish like this blog and I can still paint my landscapes and abstracts.

I am a happy, lucky fellow!