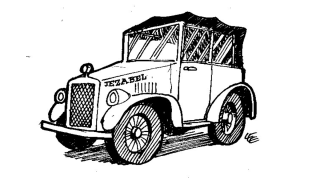 When I was young, about sixty years ago, and before I married Jacqui, I owned a little 1925 Morris “Sports” car, (Jacqui swears she fell for the car, long before she fell for me).

It was classified as a sports car because it had a cloth hood and no side-screens at all, it was open at the sides to all weather, good or bad,

I actually made some clear plastic side screens later, which helped to keep MOST of the weather off passengers.

It also had a wonderful little MG engine in it, complete with overhead valves, external oil pipes and a fairly noisy silencer, which made it feel as if it was going faster than it actually was.

I loved her and called her “Jezabel”, a name I had painted on each side of the bonnet. The hood was black canvas and I painted her body a bright red colour. 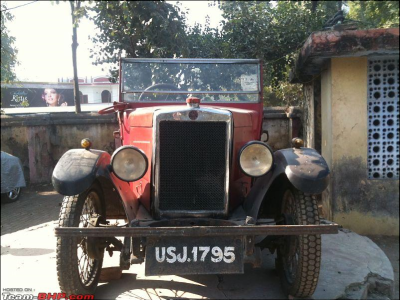 Her wheels were more suitable to be fitted on a bicycle rather than a car; they were strikingly narrow when compared to the massive things even the smallest modern vehicle boasts.

Like a pet dog, Jezebel went just about everywhere I went, even popping up the road for a packet of fags required the use of the car just so that I could show her off to everyone I passed!

A modern motorist might be a little alarmed if they were suddenly exposed to Jezebel - for a multitude of reasons, with the tyre width being just a start.

She came from an era where safety had not yet been discovered, so the brakes had very little to commend them, a fact even the manufacturers were aware of, as became apparent when the hand-book was examined, (yes it was still there, despite the fact that she was then thirty-six years old).

The book said that, should an emergency occur, the driver should apply the foot-brakes as hard as possible, while at the same time pulling on the hand-brake with the left hand, while steering and manoeuvring the car with the right hand.

I used this method many times, when driving down hills, and the very best the car could do was to travel quite slowly, but never to a stop!

Luckily I never experienced a real emergency while driving, because I doubt that I would be here to tell this tale if I had.

Another sign of age in Jezebel was the mounting of two levers behind the steering wheel - these were for the driver to operate the manual advance and retard, and fuel mixture during the driving process, otherwise all sorts of weird things happened, from an almost complete loss of power when ascending a hill, to frightening ‘pinking’ of the engine if she was too advanced.

Another sign of early motor design could be discovered inside the gearbox, should anyone wish to do so - all the necessary gears were there of course, all three of them, but there was no synchromesh!

To all you youngsters, used to just pushing the gear stick, or better still driving a car with automatic transmission, this absence meant that, especially when going down through the gears, it was necessary to double-de clutch which sounds a bit complicated, but is in fact VERY complicated, requiring a good ear for the sounds of the engine and the ability to press the clutch, put the engine into neutral and release the clutch, press the throttle to get the revs up to the required level, (hence the good hearing), then press the clutch again at the same time moving the gear stick into the necessary gear, easy once you knew how but like trying to learn a new language without an instructor otherwise!

Another VERY unsafe design issue for the car was the petrol tank. 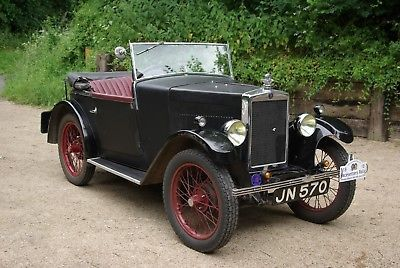 This was situated handily in the engine compartment, right above the engine because no-one had as yet discovered the idea of a pump to bring the fuel from the tank to the carburetor, (that’s another thing young people may not know), so the tank had to be placed where it was so that the petrol could flow to where it was wanted, by gravity.

Now this alone sounds pretty unsafe doesn’t it, but you’ve heard nothing yet – if I switched off the engine, as one should when filling the tank, the heat from the engine instantly evaporated the petrol in the pipe leading down to the engine and I couldn’t start again for about twenty minutes when everything had cooled and got back to normal.

So, I did the only thing possible, I left the engine running, while I filled the tank!

Can you believe it?!!

One little splash of fuel onto that hot, working engine and it would most likely have been good-bye earth from me, especially with a tank of petrol above it and a petrol pump shoving more fuel over the area as well!

I could go on, but space is limited, so let me just say I enjoyed the few years I owned her, she carried me many thousands of miles and never let me down, unlike many much more modern cars I have owned since.

Motoring really was motoring in those far-off days, and don’t forget, on top of all the travel difficulties I’ve mentioned above, there was the added hazard of small, narrow roads - motorways and freeways were still a long way in the future.