If I Was Designing The Human Body!... - Brian Lee 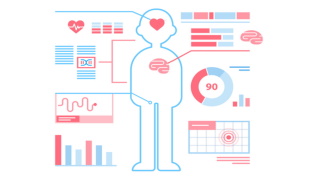 The human body is undoubtedly the most wonderful piece of engineering, designed over billions of trial-and-error years by “Nature”, (I’m using this term, then no one can get offended because their favourite Deity has been left out!), to arrive at what we have today.

But as with most things, it’s possible to find a few minor flaws in the design, as happened on the “unsinkable” Titanic for instance, or the last manned attempt to get to the moon, when the side blew off their module, and they had to just circle their target and then head for home again, or the early mobile phones, which only worked in special spots, usually at the bottom of your garden.

Crazy person that I am, I’ve been kicking a few ideas around my studio, where I feel “Mother Nature” could have done a little better, using basically the same materials that we are made of now.

BRAINS IN THE CHEST?
For instance, wouldn’t it have been wiser, instead of putting our brains in our heads, with a solid, hard casing of skull all around it, ready to bruise our valuable ‘computer’ if a comparatively light blow is struck anywhere above the neck?

How much better it would have been for us if our brains had been installed in our chest cavities, nestled between two lovely soft pillows of lung and surrounded by a very strong outer cage of ribs.

It would take a really violent blow or a deep stabbing to harm our most valuable piece of equipment if it was there!

HEARTS UP HIGHER?
Meanwhile, our hearts could be moved upstairs, into the cavity vacated by our brains, where they could beat away happily, with less effort because virtually everything needing blood would be below – the heart could almost stop beating altogether and let gravity do the job, except of course that the blood needs to be returned to the heart ready to start a new circuit of the body, but a lot of that effort could be eased by the arteries, doing their own, independent pumping!

Another set of ‘improvements’ that could have been made are centred around the point where we take in food and air.

THE MOUTH?
How much more convenient would it have been if, instead of relying on our mouths to handle the whole job, “Nature” had installed two completely separate systems, one to carry food and drink, the other to handle the intake of air and the operation of our vocal chords.

Just think, there would be no spluttering and choking on a piece of swallowed food or drink, “going down the wrong way”! And the same would apply to the air-supply tube as well – everyone knows what it is like to have the tiniest bit of food or drop of water go down into your lungs, and that would be a thing of the past; a bit of food caught down there – just blow hard and out it comes, with no disturbance either to the “patient” or those around, waiting to beat you on the back!

WHAT ABOUT OUR SKIN?
Then there’s our skin!

It works pretty well doesn’t it? It’s flexible, semi porous and it exudes all sorts of protective fluids, to cool us on hot summer days and to protect us from the various pathogens that alight there, viruses and bacteria.

But the skin itself is open to numerous types of attack, in its live state it can develop melanomas, warts and rashes, all either unsightly or deadly. Like its compatriot the heart, in its live state it offers little protection against a sharp knife or a bullet. No, our skin could do with redesigning so that it remains flexible, but is more impregnable intrusion, like a modern bullet-proof vest!

THE NERVOUS SYSTEM?
And what about that intricate web of ‘wires’ that completely cover our whole bodies, and a lot of places hidden deep inside us too?

Our nervous system allows us to feel our environment, it makes us recoil in pain if something nasty touches us, (what we call a ‘reflex action’), it tastes and smells everything we eat, ready to warn us if we present something suspicious to any part of us, it listens to and watches our entire environment, and it does numerous other things for us as well, again for our protection.

Our nervous system is like some enormous telephone system, with millions of sensors looking out for us - fantastic! But wouldn’t it be nice if we could redesign the whole system so that it tells us about danger or pain and then switched off the pain and the discomfort and simply reminded us, every few minutes, to take whatever urgent action is necessary to put things right.

Just think, you could go to the dentist, and not need anaesthetic, whatever evil thing was going to happen to our gums – sheer nirvana!

So there are just a few ideas of what could have been done, especially if “Nature” had possessed a computer to help with the work!

But I confess, basically I am pretty happy with what I have, and I doubt that the 'improvements' I have mentioned would make me any happier to be here than I am now, so I won’t be trading myself in for a later model! (I did warn you that I was crazy, didn’t I!)