How I Survived Two Strokes & A Hole In The Heart! - Daniel Preston 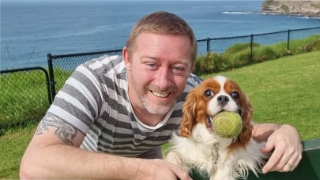 In February 2021, I had the second of two-orbit decomposition surgeries* in treating my secondary Glaucoma and Thyroid Eye Disease.

Unbeknownst to me, a blood clot had formed in my body from the surgery.

Three days post-surgery, I was recovering at home, and I remember that I had a bit of a niggling headache, but otherwise, I felt fine. Seeing that I was okay, my husband Will went off to his Arakan Martial Arts training whilst I stayed home.

After he left, I wandered out to the balcony to try to enjoy the last of the sunshine and attempt to clear my headache. Within about 10 minutes, I remember my headache becoming excruciating, and my fingers were starting to go numb with pins and needles going all the way up my arm.

I wanted to go inside and lie down though it was like my body wasn't listening to what my brain was telling it. I literally couldn't move. I was still totally coherent through the process, pretty much-understanding everything that's going on around me. But I just couldn't 'communicate' to my own body.

I was sitting on the bench on the balcony and tried to stand up, and then I just collapsed. I tried a few times to pull myself up, but I just couldn't do it. And I ended up sitting for ages before I noticed that I was leaning and was going to fall on my side. For ages, I had to use my left arm to hold myself from falling sideways until eventually I couldn't any longer. Finally, I laid down on my back, trying my best to stay focused.

It started to rain and was getting dark at this point, and I just thought… 'I'm going to die. Will's going to come home and find me dead!' I was really, really scared and started to get very sleepy too.

When Will got home, 3 hours had passed. He was on his phone with his parents as he had car problems on his way home. As Will walked through the door, he noticed me outside, sitting on the ground.

It took Will a few seconds (that felt like minutes) to realise he really needed to call Triple-0.

At first, Will thought I was either drunk or had a panic attack. It started to rain more, and I continued rocking back and forth, slurring my words. My right arm was twisted backwards, holding up my body. Will was trying to identify what had happened. I wasn't making it easy for him slurring my words and rubbing my eyes. You see, I had 40 stitches in my left eye from the surgery. Will was very concerned that I would tear my stitches and impact the surgery.

On the line with Triple-0 Will answered a series of questions as he struggled to hold the phone while trying to keep me upright and hold down my left arm.

They advised that help was on the way but after 20 minutes on the phone, the operator explained she needed to end the call to take more calls but said to call back if my situation changed.

Will then called our friend Lauren, who's a senior nurse at RPA.

Lauren immediately took charge of the situation and had Will on facetime and completed a few tests to identify that I had suffered from a stroke on the left side of my brain.

Thanks to Lauren, she told Will to call Triple-0 back and helped to escalate the call. Will told me he thought the ambulance must have become lost as he could hear it moving through the streets.

Meantime Lauren called my phone and stayed on the call until the ambulance arrived 40 minutes later. They had come from Maroubra as no other units were available.

I was taken to the Royal North Shore Hospital and I remember Will was in the front seat, giving them directions as their GPS was down and they didn't know the area. The driver even entered through the wrong entry!

Apparently the ambulance needed to slow down on arrival to let someone cross the road who ended up being the on-call surgeon!

Anyway after completing the relevant test to confirm if indeed I had had a stroke, they had two options… operate here (which they couldn't as I was on blood thinners from my previous surgery) or transfer me to the RPA (Royal Prince Alfred) to complete a clot retrieval.

Can you believe that a major hospital doesn't do specific procedures after 8 pm? I was fighting the clock as every minute counted towards my hope of recovery.

It's ridiculous that a 24/7 emergency hospital isn't equipped to deal with a stroke victim who has suffered an ischemic* stroke! This is the most common form of stroke!

I thought, here we go again!!

The same junior ambulance team transferred me to RPA. They told Will they have never driven through so many red lights at the speed they were driving.

Six hours had passed by this point… well past the time when they can do something to prevent severe damage.

The team at RPA knew I was on my way, so they were ready and prepared to get to work once we  arrived. After the clot removal, I was monitored there overnight until I was transferred back to Royal North Shore Hospital for further tests.

Over the following days, they discovered that I had a second stroke on that night. A hemorrhagic stroke (a bleed on the brain) before also discovering that I had a hole in my heart after been transferred back to RNSH to finish my treatment.

So I had two strokes, and now I have a hole in the heart!

Initially, I couldn't walk or talk for around the first two weeks or so. I remember I started to walk first because I hated the fact that I had to go to the toilet with someone and I was just determined to do that by myself for my own privacy.

My speech took some time too but eventually started to come back slowly as well. After a month at RNSH, I was transferred to Mona Vale Rehabilitation Centre, where I stayed for two further weeks.

I'm still getting home care now, but the current lockdown has moved to virtual care for at least the next few months. However, I can see my physio one-on-one as she meets me at the local park, where I can walk and do some basic exercises.

It's been a long, long road, and I've definitely recovered a lot, but I still suffer from Aphasia, a form of language disorder that results from a significant brain injury.

I've also have Apraxia, where I have difficulty with skilled movements, in my case forming words, which is brought on by muscle and mental fatigue.

Overall, the primary damage that's been caused is mainly cognitive.

My memory and multitasking abilities are a lot less than they used to be, so I'm still getting used to that and may not recover from that, apparently. It also has affected a lot more, such as a complete intolerance to loud noises and multiple people talking a once… but there's no point listing everything here.

It's time for me to start focusing on what I can do rather than what I can't! 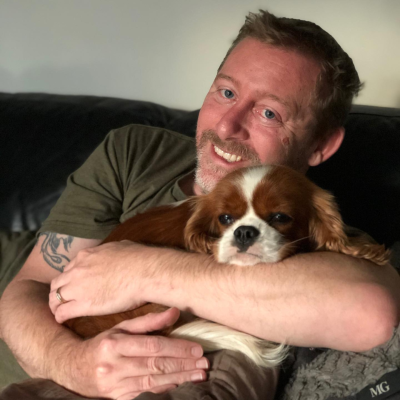 I had the hole in the heart closed a few weeks ago – what they call a PFO closure. It didn't go exactly to plan, but the surgery went well. That's the main thing.

As you can imagine, it's been an eventful six months haha. I am still yet to go back to work. But we're in a lockdown anyway, and I'm kind of happy about that, to be honest. It has taken some of the pressure off, at the very least.

We also adopted a companion pet for me. A beautiful Cavalier King Charles Spaniel named Tinka. She has helped me in so many ways! From my general mood, going for daily walks and with my communication.

Everywhere we go, we get stopped by strangers wanting to pat her and have a chat. Having Tinka in our lives helps take my mind off everything so I can start to enjoy my life again.

Oh, and before I forget, I REALLY want to say how grateful I am to my hubby Will, my mum and dad Irene & Allyn and all my close family and friends for the ongoing support they've given me.

As a stroke survivor, I feel I have a responsibility to share my story. If you want to know more about strokes and stroke prevention, speak to your local G.P. or check out www.strokefoundation.org.au for extensive resources.

You can download a copy of the "Recognise STROKE Think F.A.S.T." poster, which Triple-0 and our friend Lauren used to help save my life.