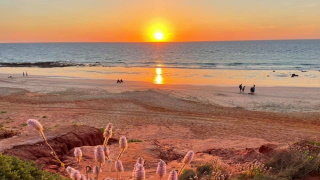 My grandmother was a lemon sucker from way back. Blunt was her delivery and cutting were her words. Not indulging my emotions, she’d tell me to put my bottom lip away, to stop sulking and to be grateful.

She said words like nonsense and rubbish and codswallop. If she were a plant, she would be a cactus. With spikes and prickles, she kept you at bay.

Living through war and depression, her generation used what they had to make it work.

Safer to be pragmatic than emotional, they toughened. They put mercurochrome on open wounds, they ignored spiteful words, and they didn’t take themselves seriously.

They were grateful for hand-me-downs, for a job, and for a husband who returned from the war undamaged. They spent hours at the kitchen table perming each other’s hair and chain-smoking Benson and Hedges which they sent us to the corner to store to buy for them.

As the children and grandchildren that were raised by this generation, we were expected to toughen up too.

If we cried, we’d be given something to cry about. If we got in trouble at school, we were in twice as much trouble when we got home. If we didn’t eat all our dinner, it would be served cold for breakfast.

You didn’t answer back, you asked for permission to leave the table and you didn’t dare throw a tantrum. As a result, even though it came at the cost of our emotional well-being, we became resilient. This generation knew that when life gets hard, and it does get hard, resilience is our greatest defence and the greatest gift they could give us.

This is what I remind myself of whenever I encounter the purists of the camping community.

These travellers love the vastness and embrace the nothingness. Dressed in King Gees and flannos, they are the masters of necessity. Not wanting nor needing the modern conveniences of today’s vans, purists keep it simple.

Tea brewed in the billy with a golden-syrup dumpling for breakfast, and a dinner of snags and spuds wrapped in foil and cooked on the coals is soul food to a purist. Leaning into the stillness, they know that nature unveils itself when we are silent. Black cockatoos and wild budgies, dingo tracks and frilled-neck lizards, galaxies of stars and glorious sunrises reveal themselves to the purist.

Spend any time in the camping community and chances are, you’ll encounter a purist.

When you’re in the middle of nowhere and you see a lone van pulled up 500 metres further down the road from everyone else – that’s a purist. When you hear someone say they’d rather machete their head off than camp near other people - that’s a purist.

When you read comments on a social media post about how the red dirt sticks to your feet and they say - if you don’t like it, then stay home; or harden up princess - it’s only dirt, not poison; or be grateful you have feet - that’s a purist.

These candid comments used to hurt my feelings until I recognised them as Nan’s mob.

When I'm complaining about the dirt, the distance or the drudgery of hours on the road - they’ve got three words for me. Nonsense! Rubbish! Codswallop!

After all, resilience is what you need when you’re on the road, save the emotion for the breath-taking scenery and the magnificent sunsets.

Expect a purist to show sympathy for the challenges of van life? My arse!