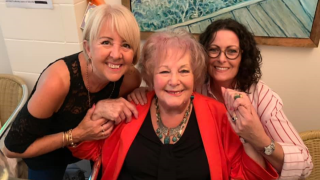 Who knows, what life will be like at 80? Certainly, we don’t have any idea when we are in the busy family years; or those times when we can party till dawn and still get up for work next day. A misty future, all lavender and lace seems to be a very far off future.

I planned big for my 80th. A meal with friends and some family the Friday night before;

Which was booked at the local pub with a cake made by a beautiful friend… then in the afternoon of my actual birthday on the 22nd June, I had booked the Bull Bar, a new venue in our small town with about thirty or more people coming. Food was simple…. large platters of cheese and dips and olives and bread.

A few family members came from around the area, friends from the town and a beautiful niece and her partner were flying down from Brisbane.

Three days before the big event - the 19th of June, my husband Brian appeared unwell; he had been feeling weak and lacking energy for a while, with vague aches and pains.

I called an ambulance when he seemed in worse pain. After checking him out they told me his vital signs were normal and to just… “see your Doctor in the morning!,” and then they left!

He was not feeling any better so the next day I took him in to the local hospital emergency. The pain was much worse, and he had trouble standing or moving easily.

They scanned him and then at about 6pm sent him home again.

I was not happy about it at all. He spent the next day either limping about or mostly lying down when he could.

Our son and his wife and Mum in law arrived and we realised Brian was too unwell to come out with us. I went ahead as he said he’d be ‘ok in bed, just resting’. 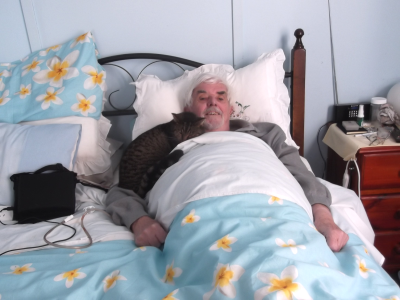 I had my first party with friends and was not home late. Husband still looked unwell.

On the Saturday, he tried to come round and gave me some perfume etc, for my special day. I could tell he was still in pain and became desperate; I rang for an ambulance and had to really fight to get one. Mostly because where we live, they were all out.

His pain was severe by now and in the lower right side! I thought it might be appendicitis! I pleaded with them to find an ambulance. Eventually after trying to placate me, even putting me through to a mediator, they finally found an ambulance. Of course, by this time I was REALLY in distress.

At last at 11 am he was given morphine and taken to the bigger hospital an hour away. “I’ll cancel the party!” I pleaded.

Even in pain he made me promise I would not do such a thing… ”Have your party“ he said. “I will be taken care of and you can see me later”.

So I promised but felt dreadful as you can imagine.

Alone in the house I was in shock. I knew I had people arriving from around Gippsland and a niece already driving to us from Melbourne. Our daughter lives in England.

I had no one really close to help.

Then I thought I’d better apply some make-up as I looked quite pale. Suddenly the doorbell rang. It was probably our niece and her husband.

But I went after a minute or so and there on the doorstep was my beautiful daughter.
I burst into tears!... never had I expected she would turn up like this.

Certainly not with the drama we had happening.

She had arrived from England and stayed in Brisbane with her cousin. The joy was so special to see her, and the comfort was immense. I rang the hospital, asking about my husband, still no real news they were doing tests.

So we went to the party, and I think I operate on auto pilot at such times. Yes I had a good time, saw beautiful friends and had a few happy hours but with my mind in two places.

My husband rang me at 6.15pm, as I was going home, and he was being prepped for major surgery. I told him I loved him. He had kept the secret of our daughter arriving and that was the reason why he wanted me to have the party. It was a bitter-sweet time.

They had taken out a badly burst appendix. It had been close to killing him. He was in intensive care, and I was told to expect the worst.

He was on life support apparently. 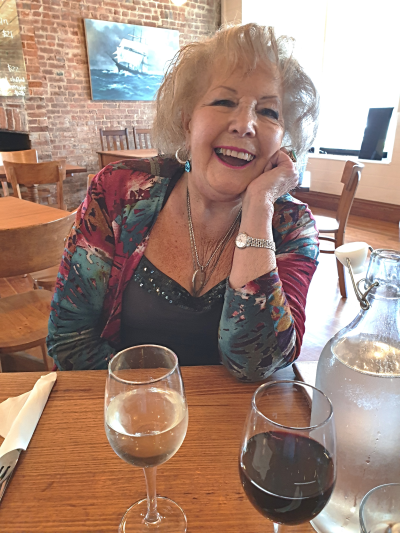 Arriving at the hospital, I had my heart in my throat, but he was sitting up and looking almost normal except for a few tubes, He was high on morphine, and thankfully not in pain.

So as a birthday, my 80th was very memorable.
The next six weeks were hell for both of us, but we are strong and have survived!

I have since had two more birthdays and my husband has recovered – a lot attributed to my good nursing skills of course!

But he has been left with a stomach that looks like a road map.

However we both try to take each day and grab some happiness from it. When you look back at a long life; as ours has been, it consists of many highs and lows, but it takes a real optimist to just live for the highlights.

We’ll continue to do that.