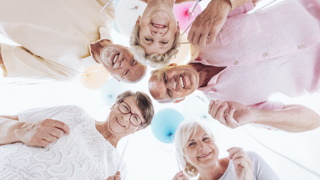 As we move through life, we have various friendships, groups who surround us, support us, and become a backdrop to work, family life and fun.

Starting married life is often a testing time, as we move away physically and mentally from the friends we had growing up. For me it was a 12,000 mile leap.  I went from being a shy nineteen year old with a few school friends, to a wife, in a new country, left in the flat we rented; knowing no one at all.

Three months after our wedding we went to New Zealand. This was 1959, and communication was primitive. Family was too far away to help us.

It was a new estate and this helped to keep costs down. Each couple doing what they could to assist with the jobs, until all the rooves were painted and drives made tidy. Then within a few months we had firm friends, and shared meals.

It was a happy time.

I had two babies in eighteen months, and relied on the wisdom of the older mothers to help me. I had no family to back me up (all being back in the UK!), and learned fast. I loved our new house, with three big bedrooms a large garden, and bliss for me - a laundry!

Well not sure about the bliss, perhaps I spent too long in there at first.

From these friends I learned; how to make lemon curd, whitebait fritters, seafood chowder, the words to some Maori songs, an attempt at the Poi dance, and how to drink.

I had my first alcohol. Wine from the vineyards beyond Auckland. We had evenings out and as it was ‘prohibition’ we drank wine from tea cups that they supplied as a sneaky way to disguise it!!

No alcohol was allowed with dinner.

Our beautiful friends had given us some fun times though, I remember my 21st birthday, just home from hospital with our daughter, they arrived in twos and threes, and put on a totally catered party for me!

As I fed my new baby and put on a party dress, they served food and drinks. It was a great party and wonderful friends.

Back in England by now with three children was the bleakest period for me, I was again left on my own all day as husband had to get work. I knew no one. By the time the youngest was two we had moved again to be near husband’s new job.

Then as often happens, after months of only talking to the shop keeper, and nearly going crazy; I met some other mothers when I took our daughter to the school gate.

Then one suggested I came to ’Keep Fit’.

Wow that changed my life. Who would think so?... But it did!

I became a more liberated woman, I was 28 and had children at school and nursery school, I loved my evening of ‘keep fit’ and the social time after, we arranged parties in the road where we lived and it became a much happier place to be.

I keep in touch even now with one of those Mums. I began to be a little wilder and bought my first really short mini skirt. The swinging 60’s were impacting.  From that home we then moved to a small village, more friends, wilder parties and the happiest time ever.

I look back and am so grateful for those years, the music, the shared fun, the beautiful Westwood  Wiltshire UK countryside, and the freedom our children had growing up.

We still have ties with those friends and with that place. Our friends had a long influence on our lives. In fact I’m sending cards this week to those dear friends.…

Sadly we have lost some as you do at this age. About six of that close band are no longer around.

Two have succumbed to Alzheimer’s yet we keep up our contact and rehash our wonderful memories when we talk or meet. My husband and Brian and I went back a few times and met up in 2012. We even had a party that echoed ‘the old days’.

Now it is harder to get there, we just can’t travel like that with all the travel restrictions.

Today, our friends are here in this small town of Yarram in regional Victoria we now call home.

The people we’ve met have all been welcoming and we feel we belong. Because this is such a friendly town.

These friends suit this time of our life; yet we never forget the ones we met in other places. We have a patchwork of people, made up of all the life aspects of a long life, art, music, work.

I would not change a thing, or a friend. So will raise a glass to friendship.