Evolution… Can We Really Survive The Future? – Brian Lee 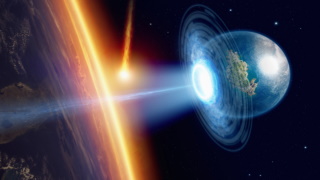 I am a believer in evolution. In my mind it is something that has always been going on, not just in the lifetime of humans, but long before that, right back to the moment the earth was first formed out of primeval dust.

I think of things like the development of the motor car, from a simple cart to which an engine was somehow strapped, right up to the computer controlled wizardry we rush about the country in these days as one part of evolution.

Think of all the other effects this simple invention has had on the world and our lives; it revolutionized travel, CHEAP travel, for everyone so we could go much further, which led to changes in many gene pools, because until then most people wed either in their own parish or in an adjacent one, but suddenly you could go and find a wife many parishes away from your own, reducing the chances of in-breeding!

The motorcar also turned war into a mechanized art, with armored vehicles and tanks replacing the horse, resulting in many more deaths than previously – again having an effect on the gene pool, with many of our best young men and women no longer there to improve us as a race.

The discovery of ways to control electricity also had similar effects on everyone, in much the same way as the development of the motor car, with one discovery giving birth to another.

One has only to look at the development of the humble light bulb, to see evolution in operation, from the simple globe of vacuum filled glass with a piece of wire stuck inside it, through various changes and improvements until someone discovered the neon tube light and, via several other incarnations until the present when the LED bulb took over.

But that is just one tiny part of the evolutionary developments that owe their existence to electricity!

Virtually everything runs on electricity these days, including the motor car mentioned above and the computer I am sitting at now, writing this stuff. We just could not exist without it, and maybe one day we won’t be able to exist with it!

Who can guess the future power of the volt?

I consider the dreaded “global warming” to be an evolutionary factor too. It has occurred many times in the past and each time it has wiped out many species which were unable to survive, but made room for other, hardier groups of animals to make a success including us, the most successful animals of all perhaps, except for the dinosaurs, who survived on this planet for many millions of years longer than we have.

I often wonder if we shall be as successful as those animals; we do seem to be intent on killing ourselves most of the time don’t we, which makes me wonder!

We spend enormous amounts of both time and energy on trying to save animals like rhinoceroses, etc., and I admire the people who are working to do this good work.

But I can’t help feeling that in the long run, evolution is going to win this little battle.

Evolution has been fighting to maintain the ‘livestock’ of Earth for many billions of years longer than we have, so that as one species dies out, due to climate change, meteor attack or any of another myriad of reasons, evolution is ready to replace them with either an updated version of a particular animal, or by replacing them altogether with something else, more suitably capable of using the new conditions.

And this applies to the plant life of the world as well.

Don’t forget, plants, trees and fungi are just as much alive as us, but in a different form to us. Plants have DNA just as we do, and plants require food, water and sunshine just like us as well.

They have changed over time, due to evolution too, their ancestors were only marginally like the trees we see today – they have developed or died in much the same way as the animals around us, depending on whether they could adapt or not.

Every living thing on Earth is fighting a daily battle, not individually, but as a race or species, to survive; we ourselves are fighting two of them at this very moment, climate change and Covid19.

Lose those two fights and I’m afraid it could well be ‘goodbye mankind’ and hello ants, bees or some other group, better at surviving than us.

It’s going to be a rough ride!