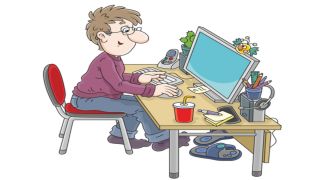 The modern computer is a wonderful piece of equipment isn’t it?... It can perform literally millions of tasks, with more being added all the time as fresh programs are written and larger and larger memories can be built into smaller and smaller machines.

Very few homes or offices can run efficiently without them these days, they help with the family budget, they assist in the design of new products, and they make a novelist’s effort much simpler than in the days of say, Charles Dickens, who wrote all of his fine literature with a pen and ink, on pieces of paper!

And that’s just the surface of what can now be done by experts, both in the creation of software and the compilation of useful material.

In fact, so clever are these people that they are now almost at the point where they design themselves out of a job, with computers capable of human speech, (without the dreadful nasal whine of the early speech programs), and also capable of producing elementary designs for products and programs, without the intervention of a human being at all.

It’s called “artificial intelligence” (AI), and with it, these machines will very soon no longer require our assistance at all, they will literally be capable of real thinking and real awareness, just like us, which is a worry!

Having described what awful and great things the computer can do for us all, the supreme irony is that we nearly all have one on a desk, but very few of us use much more than one percent of what it can do.

I would guess I’m fairly average in my computer usage, (or perhaps a little less as I approach my ninetieth birthday!), and what do I use mine for?

Well, it’s a fairly long list to be sure, but each piece of work or game I play uses only a few of the memory cells (called ‘bytes’),  it possesses while massive areas of the machine lie fallow, unused, and ignored, because I just have no idea what to do with them!!

Here is a basic list of all the things I require my computer to assist me with; first of course it’s a modern replacement for the typewriter, but a typewriter that can do much more than the mechanical unit it has replaced.

It can correct my spelling and everything I write can be immediately corrected of any typographical errors, without having to start that page all over again!

It can produce any sort of layout I desire to make the written words look better and it can work in any colour I choose, plus incorporating pictures in amongst the text, again in colour.

Next, it’s an efficient diary/calendar where I can store any amount of daily information I want, memories of the past and plans for the future.

Then it is an encyclopedia containing a thousand times more information than the old Encyclopedia  Britannica could ever carry, plus it’s always bang up to date, something no printed book can possibly match!

And its information that can usually be found within a fraction of a second.

It’s also my adding machine, my photo laboratory, my social connector, (through Facebook), my bookie, and my game centre, though I don’t play many games apart from a few card ones; I can’t be bothered with all these exotic war games the kids seem to enjoy playing, and I doubt I could operate that odd looking tool they use to operate the games, shaped like a crescent moon, with knobs and switches all over it.

Of course, there are some pieces of ancillary equipment which go with the computer itself, not vital to the operation, but life would be a lot more difficult without them.

The main one among these is of course, the printer!

We were told, when computers first appeared over the horizon, that this meant the end of paper; everything would now be stored electronically, inside the machine itself, no large filing cabinet needed, no reams of paper to buy – a wonderful, tidy world was going to open up to us all.

So, because the average person isn’t too good at saving stuff, where it can be found in the machine, a job gets reassuringly printed on paper and filed away in a cupboard, where we always filed material before the electronic age.

All in all my computer is a very useful tool, which I don’t believe I could manage without, now that I have owned one for so long, but I have to admit it can get Jacqui and me into a state approaching rage when things go wrong, although most of the time the problem is more due to the producers of the software we have to use, than to the printer itself.