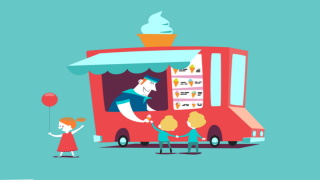 Have you ever wondered what happened to the ice-cream van that used to call up your street, pretty well every day of a 1930’s/40’s/50’s summer?

And how about the horse-drawn cart that the man with the vegetables used, shouting some mysterious word that sounded vaguely like, “Vemanear”, (perhaps that was “veg man here”, I don’t know), to let the housewives know he was around.

Add to that the chink of glass on your doorstep at about dawn every morning and the clatter at the mailbox, and you have a pretty well complete picture of suburban life in the fifties.

It was also a time when kids played cricket against a lamp-post just up the street; wives, chatted over garden fences and the mowers, pushed across lawns at the weekend by eager young husbands, made a ‘clackety-clack’ noise because no one had worked out how to fit an engine to one as yet, and ‘lawns’ were pretty small anyway in those days so a motor mower would have seemed a bit of an ‘overkill’, like taking a sledge-hammer to crack a walnut, as the old saying goes.

This was the final glorious fanfare of an era that had been going on for a hundred years or more, interrupted only by the occasional war and outbreaks of influenza or smallpox, and it had been the way of life for people in most ‘civilised’ countries.

Those were the days when you went to school or college, learned a trade and could then expect to join the first company you applied to for a job. And you were very likely to stay in that job for the whole of your working life, progressing through regular promotions until, by the time you reached retirement age, you could be pretty certain you would have attained some sort of managerial position.

You were expected to save a little from your wages each week, so that you had enough to live on quite reasonably from sixty-five onwards, helped by a small pension from the government. There was no compulsory superannuation then, part payed by the employer, except in fairly rare cases, but everyone seemed to get by quite satisfactorily, even though in most cases, the husband was the sole wage-earner, while his lady attended to the home- front.

How times have changed!!

Then there were the journeys by air, perhaps more frequent here in Australia, because of the considerable distances that often needed to be travelled. Remember how you were sometimes asked if you’d like to go up and have a look round the cockpit, to see how it was done?

Imagine trying to do that today! And you were expected to dress much more formally too – no sandals, tee-shirts, and shorts in those days. You could get away with smart casual gear on a lot of flights, but they’d really prefer it if you wore a suit, and that was for the women as well as the men!

In retrospect, it was a much easier life in those days after the last war wasn’t it - or it seems to have been so anyway, but it’s always so much easier to recall the good things than it is to remember what were certainly bad old days for a lot of people.

Even a simple infected appendix meant certain death, antibiotics were a long way off in the future, and as for key-hole surgery, well that would have been considered to be pure science fiction!

One thing is for certain – Australia is still the most beautiful country in the world, in a dynamic sort of way. We have wonderful weather for the most part, we have glorious beaches and we have what must be the cleanest, freshest food in the world, provided we are careful how we shop, looking for local produce.

On top of it all, we have the wonder of modern electronics, with its ability to make not only Australia, but the whole world, a much smaller place, which could, if used properly, also create a much friendlier atmosphere for us all.

It worries me greatly that we might be slowly losing many of the good things about this country, things that had to be worked for, just so that the electronic wizardry of the future can take over our lives – I just hope we take the right route and protect all the valuable things that are still around us to this day, if we know where to look for them.