Ahhh... Those Were The Days! - Brian Lee 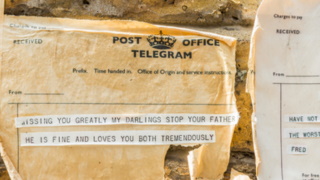 I’m sure I’m far from being the only one, but with increasing old age I find that I keep getting ‘snap-shots’ appearing in my mind’s eye, memories of the silly, painful, happy or sad things the occurred to me when I was very young, (you know – less than thirty years old), and that have obviously been stored in my head for all these years, until a drawer or a filing cabinet in my brain has suddenly burst open and let a memory out!

I don’t have to be doing anything relevant to the thought that escapes, it literally just hits me and makes me go nostalgic for a moment, or angry, or happy depending on what the escaping thought is.

Like just now, I was just sitting here, madly doing nothing on my computer, when my brain said, “Hey, do you remember the time when there were things called telegrams?”

That’s how it works, I have no control over it, my mind is the boss in these circumstances, and I have to do say or think something about it, or I get a lost feeling for the rest of the day.

Anyway, perhaps after all, this idea I’d just had may have had a certain amount of relevance, due to the fact that I am sitting in front of my computer, the modern alternative to the telegram, when the thought occurred to me.

But of course, I couldn’t help but start to think about what my brain had said.

And it occurred to me that almost from the invention of telephones, the telegram became the most important, in fact just about the ONLY way of getting an important message to somewhere. Be it a house just down the street or someone on the other side of the world. 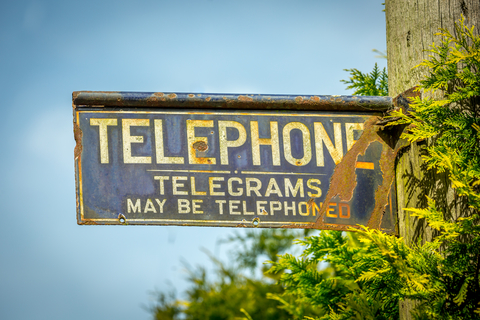 Even without the power of speech on some lines, the message could still get through due to the invention of another valuable service – Morse code!

Wars could be started by telegram, or relationships broken, or news sent, good or bad.
Good news could be sent everywhere, and so could bad.

The lad on a bike arriving at your front door from the post office, clad in his special uniform, could inspire joy or fear. Joy if a family member was going into labour today for the birth of a new family member, or fear if you weren’t expecting a telegram at all.

That telegram arriving unexpectedly more often than not came bearing bad news rather than good, especially if it arrived late at night – no one sends good news then, they wait until next morning so as not to scare you!

Of course, as communications improved with the invention of teletypes, faxes and various other methods of moving information quickly, the mission of the telegram took on a much more friendly, but less exciting task, when it became the popular method of sending wedding greetings to a couple whose marriage couldn’t be attended because of distance, unavoidable other commitments or the fact that the sender couldn’t stand the bride’s mother and decided to send the ‘gram’ instead of spending an afternoon being polite to her.

Then the best man could read them out to the assembled guests, to the delight of everyone, especially if some ‘interesting’ information was contained in some from the friends of the groom, revealing a history he would have preferred his bride not to hear!

Some blokes seemed to think this was mandatory and I often wonder how many marriages got off to a bad start due to the ‘humorous’ additions supplied by so-called friends.

I wouldn’t be at all surprised to find that some marriages never got a start at all due to some ill-conceived bit of old information, made public in this way.

Now of course the telegram is, as far as I am aware, dead in the water, having been killed off very quickly by the invention of emails, Facebook, Smart-phones, and all the other modern methods of communication.

Some companies around the world offer some sort of specialised service, at high cost and to specific formats, but the good old post office telegram on its familiarly printed piece of paper, delivered by the boy I mentioned above, is gone.

It was just no longer profitable enough for the post office to carry on with, so like many other wonders from the past, it sadly became redundant.

I get one silly thought groping its way out of my ancient brain and before I know it, I have another blog written when I COULD have been just sitting here, deep in something or nothing, but at least not bruising the tips, (tip!), of my finger as I have now.

I just hope the warning will help someone, somewhere, because it’s going to happen to ALL of you, someday!